Tencent formed a strategic partnership with Sohu in 2013 through which it invested US$448mm to acquire a 39% equity interest and a 52% voting interest in the Sogou.  Sogou has become the default search engine for various Tencent internet products and on a trial basis Sogou is currently operating a search function within the wechat application.

Acquisition of Sogou provides these benefits to Tencent:

The directors of Sogou and Sohu have hired advisors to review the bid, but I expect it to go through before year-end at $9.  Public shareholders of Sogou control only 2% of the voting power so I believe that once Sohu approves the deal it can be completed without a shareholder vote and without dissent rights.

Changyou was privatized by Sohu in April 2020 at a bargain valuation of $583mm.  I suggested last year that Changyou could earn at least $150mm in 2020, but this guess appears to have been overly conservative because Changyou’s gaming business earned $178mm in 2019 without any new hits.

Changyou continues work on on the next major mobile game release in its Tian Long Ba Bu (天龙八部) (TLBB) MMORPG franchise.  One round of testing was conducted in May and another will begin on 8/7.  A official launch date has not yet been projected.  This Tian Long Ba Bu – Return (天龙八部·归来 ) game will tap into a current trend for game nostalgia by incorporating some design and gameplay elements drawn from the PC-based TLBB game ten years ago.

Success is never guaranteed in a popular media business, but prospects for the new game are excellent based on:

Since the Changyou privatization was announced there has been speculation that the company would follow peers by relisting in Hong Kong or China.  Sohu Chairman Charles Zhang has always answered that it is under consideration.  Peer valuations suggest that Changyou would trade for at least a 20 P/E multiple 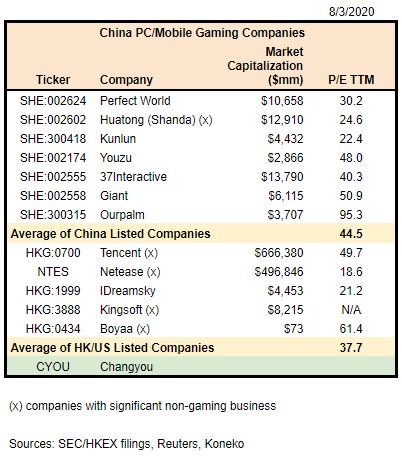 Relisting in Hong Kong would be simpler because it would not require any corporate restructuring.  Relisting in China would probably receive a higher valuation.  1H21 would be the ideal time to launch an IPO using full year 2020 financial results and what is likely to be elevated popular attention around the new TLBB game.  Under conservative earnings assumptions Sohu’s stake would be worth $57/SOHU 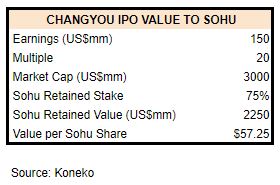 If earnings jump to $225mm then Changyou could be worth $85/SOHU.

Sohu has endured 8 years of losses due to intense competition in its news and video operations. Over the past 2 years Sohu has reduced media losses by concentrating on lower cost production of proprietary content and not renewing expensive external licenses. 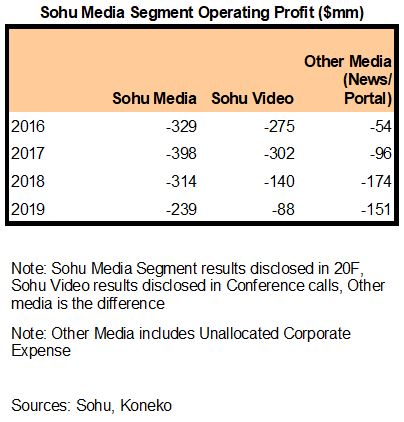 Sohu’s video business is a distant fourth behind industry leaders iQiyi, Tencent, and Youku.  Losing less money is certainly progress, but it’s difficult to see whether Sohu will be able to find a market niche offering potential for long-term stability and profitability.  Charles Zhang promised that video was on the verge of breakeven, but the COVID epidemic was highly disruptive to advertising revenues despite increased user engagement.  Video losses still dropped to just $11mm in 1Q20.

Sohu wisely completed a corporate restructuring in 2018 that positioned all of its assets under a Cayman Islands parent company.  As a result it will owe no corporate tax on proceeds from the Sogou merger or from the deemed gain on a Changyou IPO.

Sohu will report earnings on August 10 and it will be very interesting to hear comments on the expected use of the Sogou proceeds.  Possibilities include:

Privatization of Sohu is very unlikely.

Sohu has significant hidden value in Beijing real estate that it acquired in 2006-2010 as detailed in this article. These office buildings are currently used for Sohu, Changyou, and Sogou operations so they cannot be considered surplus financial assets, but they should provide some valuation support if operations were to deteriorate.

At the time of publication the author was a shareholder of Sohu.  The author does not make any recommendation regarding investment in the company.  Investors should verify any facts in the article they deem relevant to their own decision about investment in either company.

Changyou and Sohu have never confirmed to investors that a new TLBB game is under development.  It might fail to launch or it might fail after launch.

Changyou has not made any formal preparation for an IPO.  If markets and peer valuations decline then it might be difficult to sell shares or their valuation could be substantially lower than suggested in this article.