Phoenix New Media (FENG) closed the first tranche of the sale its investment in news aggregation site Yidian Zixun in 2019 and used a portion of the proceeds to pay a special dividend of US$1.35/ADS.  FENG also received a $50mm non-refundable deposit towards payment of the final tranche which is due by 8/10/20.  The recent Chinese equity market rally increases the likelihood of a successful closing which would leave the company with net cash and investments of approximately $6.45/ADS and enable payment of another large special dividend.

If shares trade at a conservative 50% discount to post-transaction asset value then current buyers may receive a high near term return and a substantially larger gain is possible over a 2-3 year period as investors gain confidence in the company’s operating business.  There is a significant possibility that FENG’s parent company will offer to privatize the company at a price below fair value and below this target.

Phoenix New Media was spun off by Hong-Kong listed Phoenix Media Investment (Phoenix TV or PTV) through a 2011 IPO at $11/ADS.

The shareholding structure carries the risk that decisions about FENG will be made for the benefit of Phoenix TV rather than public shareholders. The structure also provides some governance protection through Phoenix TV’s strong independent investors (China Mobile, TPG, and Bank of China) plus regulation and disclosure obligations as a HKEX-listed company. The 2019 return of a portion of the Yidian sale proceeds to all FENG shareholders through a special dividend was a positive signal.

Advertising revenues were been pressured in 2017-2019 by lower spending on luxury goods due to the anti-corruption campaign, weak auto sales, regulatory crackdown on non-bank financial businesses, economic uncertainty and disruption from trade conflict.  2020 results will be severely affected by the COVID epidemic which is negative for most consumption sectors, but did boost spending by internet gaming and education businesses.

Share price returns have been terrible and most media companies have underperformed the Kraneshares China Internet ETF which has been supported by returns from ecommerce holdings.  Low share prices have spurred corporate actions. 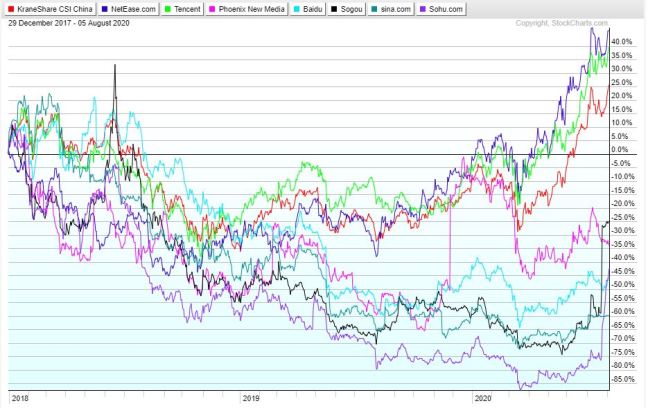 News competition increased with the explosive growth of algorithm driven content distributors including:

These “content aggregators” have no editorial function and recommend stories based on patterns of user behavior.  They have very limited spending on content, but have incurred high losses due to their cost of customer acquisition and retention.  Investors have attributed high valuations to the aggregators due to their rapid growth. FENG was fortunate to recognize the opportunity to participate in this trend through Yidian, but FENG’s share price has not fairly reflected the value of that investment, most of which will soon be realized in cash. FENG will retain a modest stake which could appreciate if Yidian’s plan to list in Shanghai or Shenzhen is successful.

FENG’s operating profit has been OK relative to other traditional media companies, but their market values are aided by profitable subsidiaries.  Netease (NTES), Sohu(SOHU), and Tencent (TCEHY) have games while Sina (SINA) and Tencent have social media. FENG plans to invest its Yidian proceeds in new areas that could benefit from affiliation with the strong Phoenix brand name and ifeng traffic.

A year ago FENG indicated that it would invest a significant portion of the Yidian sale proceeds in new businesses, but the company has not made any significant acquisitions and instead divested its stake in the Tadu reading app.  This leaves FENG in very strong financial condition, but with less clarity about its strategy for future growth.

The second tranche of FENG’s sale of of a majority of its stake in Yidian Zixun is scheduled to close by August 10 (link to Phoenix TV deal proxy).  The original sale agreement announced in March 2019 was restructured several times.  The price was reduced slightly, the payment was split into two tranches, and another shareholder exercised a co-sale right.  Everything may proceed exactly as agreed on 8/10 or it might end up just being the start of another period of negotiations.

The buyer of most of FENG’s stake is RunLiangTai Management Limited, an investment company founded by a former CEO of Ping An securities.  Its intention has been to prepare Yidian for a listing on a domestic Chinese exchange.  Shunwei Capital, controlled by Xiaomi founder Lei Jun, is another major shareholder and gaming/media company Perfect World acquired a small stake last year.

Strong performance this year of high growth technology stocks on the CHINEXT Market in Shenzhen (Index +59.1% ytd) and the new STAR market in Shanghai (Index +58.9% ytd) provide a favorable backdrop for RunLiangTai’s plan. 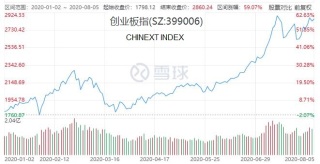 If the second tranche of the Yidian sale closes as agreed then FENG will retain a 4.68% stake that would participate in the appreciation following a successful IPO.

FENG has not disclosed any operating metrics for Yidian this year so we don’t know whether its growth in users and revenues has continued.  If business has weakened and the buyer believes that the potential valuation achievable through an IPO has declined then it could forfeit its deposit and walk away from the second tranche of the deal.  FENG’s value is considered under two scenarios:

FENG suggested during its 2Q19 conference call that 25-50% of the Yidian sale proceeds would be distributed as dividends.  Payment of $100mm in December was approximately 50% of the proceeds of the Step1 payment.  If the company receives the Step2 payment and distributes zero then it would still meet the bottom end of the guidance.  If it distributes 50% of the Step2 payment then it would be at the top end of the guidance.  The Phoenix TV proxy estimated that FENG will receive net proceeds after taxes and expenses of $385mm.

Payment of the special dividend of $100mm ($1.35/ADS) last December triggered “special cash compensation to the Company’s option holders in the aggregate amount of approximately US$8.3 million” (LINK).  If the executives holding those options enjoyed receiving that money then they are likely to support a generous distribution from proceeds of the Step2 closing.

In June and July the Chairman of FENG’s HK-listed parent made open market purchases of 16mm shares of that company.  These were his first buys since 2011.  He is the uncle of FENG’s CEO.

We don’t know whether insiders have purchased or sold any FENG shares recently due to the ridiculous disclosure exemption available for “foreign private issuers“.

Privatization by Phoenix TV is likely due to:

Phoenix TV would probably seek to pay as little as possible to acquire publicly held shares.  It owns a controlling equity interest and has Class B shares which each have 1.3 votes.  A few institutional investors have meaningful stakes.  .

A preliminary non-binding offer might be in the range of $2-3/ADS (prior to any dividend).

The Yidian transaction could fail to close.  The buyer might walk away or seek to renegotiate the deal terms.

FENG might opt not to pay any further dividend.  The 2019 payment of $1.35/ADS already met the bottom end of the guidance of distributing 25-50% of Yidian proceeds.

The author is a shareholder of Phoenix New Media.  The author does not make any recommendation regarding any investment in any company mentioned in this article.  Investors are encouraged to check all of the key facts cited here from SEC and HKEX filings and other sources prior to making any investment decisions.