Update 5/27: NYMT released 1Q results on 5/22 so the estimates in this post are no longer relevant.  The company sold all of its first loss positions in Freddie Mac K-Series securitizations so the current portfolio has lower risk and also lower current earnings power than I expected.  Management said it hopes to announce resumption of common and preferred dividends after getting data on its June 1 collections.

I have a small long position in New York Mortgage Trust (NYMT).  The company has high risk assets, but low leverage.  Based on the company’s April disclosure I estimate the current portfolio can generate $0.35/share in EPS and should support resumption of  dividends.

The securities portfolio at 12/31/19 was 60% comprised of mezzanine, subordinated, and residual tranches almost all of which were pledged for repo financing: 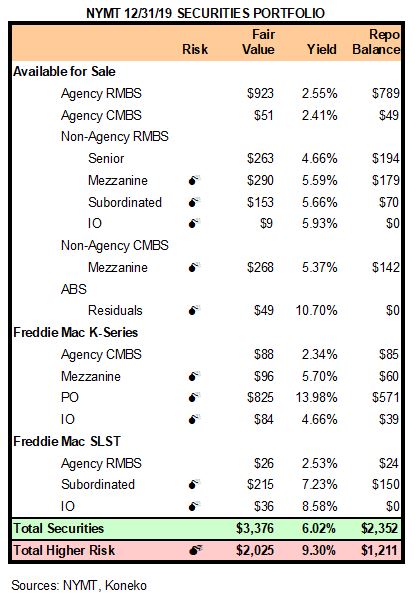 The residential loan portfolio focussed on weaker borrowers with substantial home equity.  Loans >90 days past due at 12/31 were 7% of total carrying value.

Stock Offerings – the high risk portfolio supported a high dividend yield which attracted buyers for 10 secondary offerings in the past 2 years: 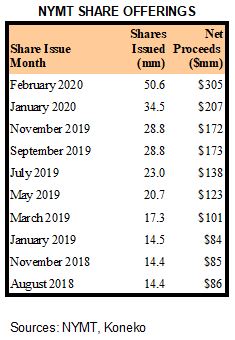 During its 2/25 conference call NYMT explained that it was confident that it could invest its recently raised capital within 3-4 months, but the market crash likely came before the company was able to fully deploy those funds.

NYMT owns junior interests in Freddie Mac K deals which are backed by pools of multifamily loans and Freddie Mac SLST deals which are backed by pools of re-performing residential loans.  As holder of the first loss position NYMT is deemed to be the primary beneficiary of the securitizations and consolidates them in its balance sheet.  The high leverage ratio may fairly represent the equity risk in NYMT’s portfolio, but it may provide a misleading picture of the company’s liquidity risk because all of the senior securities are non-recourse to the company.

The $512mm in common equity raised in January+February and limited recourse leverage are primary reasons why NYMT’s 1Q20 book value return of -33% was better than the average of -40% for 17 residential mortgage REIT peers.

Prices of non-investment grade non-agency guaranteed mortgage securities fell as much as 50% in March.  Repo financing for such securities was subject to higher haircuts and reduced availability.  NYMT and several peers (IVR MFA and MITT) disclosed that they were unable to meet margin calls on 3/23 and were seeking forbearance from lenders.

NEW YORK, March 23, 2020 (GLOBE NEWSWIRE) — New York Mortgage Trust, Inc. (Nasdaq: NYMT) (the “Company”) announced today that due to the turmoil in the financial markets resulting from the global pandemic of the COVID-19 virus, the Company and its subsidiaries (the “Company”) have received margin calls from repurchase agreement financing counterparties over the past week. Through Friday March 20, 2020, the Company timely met all margin calls received.  However, due to the continued margin calls received for March 23, 2020, the Company has notified its financing counterparties that it does not expect to fund the existing and anticipated future margin calls under its financing arrangements in the near term. (LINK)

The Company also announced that in an effort to manage the Company’s portfolio through this unprecedented turmoil in the financial markets and improve its liquidity, since March 16, 2020, the Company has sold mortgage-backed securities receiving proceeds of approximately $1.7 billion and has reduced its outstanding repurchase agreement financing by $1.6 billion since December 31, 2019. In addition, based on information available to the Company as of March 27, 2020, the Company estimates that its book value per common share as of the quarter ending March 31, 2020 will decline by approximately 33% from book value per common share as of December 31, 2019. (LINK)

On April 7 NYMT disclosed that it had resolved all of its defaults and was no longer negotiating forbearance (unlike IVR MFA and MITT):

The Company announced the following updates as of the close of business on April 7, 2020:

“The Company also continues to explore term financing options for the approximately $859 million of unencumbered securities in its investment portfolio,” added Mr. Mumma. “To the extent we are successful in obtaining term financing for this portfolio, we believe such financing could enhance our liquidity position and provide opportunities to invest in this new operating landscape.” (LINK)

Loans:  On 4/7 NYMT had $962mm of loan repo which could imply about $1.3Bn of loan collateral and an additional $0.3Bn of unencumbered loans.  So the loan balance was approximately unchanged from 12/31.

Preferred Equity, Mezzanine Loans, and JV interests:  These might have been hard to sell in a short time so the 4/7 balance was probably unchanged from $0.4Bn at year-end

Securities:   The 4/7 release mentioned $150mm of securities repo financing which could imply $200-$250mm of pledged collateral and an additional $859mm of unpledged securities for a total of about $1.1Bn.  That would mean sales of about $2.3Bn in securities since year-end which would have been primarily responsible for the $728mm decline in book value.  The sales were large enough that the company would have had no choice but to sell a portion of the illiquid junior tranches identified in the table above as “higher risk”.   Presumably all of the unsold retained portfolio falls into the “higher risk” categories and has a higher current yield than at 12/31 due to the price declines.

The company’s disclosures were thin, but may provide enough information to estimate the earning potential of the $3.0Bn portfolio on 4/7.  The biggest uncertainty is the yield on securities which will depend on what assets NYMT chose to retain.

If corporate costs are unchanged then NYMT’s current portfolio could be generating $0.35/year in EPS. 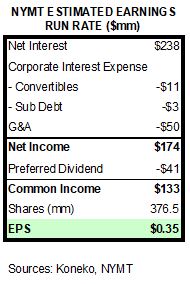 What will happen next?

Dividends: NYMT announced the suspension of its common and preferred dividends on March 23:

With the company no longer in default as of 4/7, very low remaining leverage, and a healthy balance of common ($1468mm)  vs preferred equity ($522mm) I believe that NYMT will announce resumption of preferred dividends when it releases 1Q20 earnings on 5/22.  I believe that NYMT also has both capital and current earnings to support resumption of common dividends at a rate between $0.05 to $0.10 per quarter.  I believe the share price will rally in response.

Portfolio: NYMT survived the crash due to wise use of non-recourse financing and lucky timing of January and February equity offerings.  The 5/22 earnings announcement and conference call will provide the opportunity for the company to explain its strategy going forward.  Will it rebalance its portfolio back towards the allocations it had at 12/31?  Will there be a change in risk tolerance?  Will the company return to pledging its high yielding junior securities for repo borrowing or will it leave them unencumbered?  How has the portfolio valuation changed since 3/31?   Based on peer disclosures I estimate NAV could be +5% to about $4.10.

The author is a shareholder of New York Mortgage Trust.  The author does not make any recommendation regarding any investment in any company mentioned in this article.  Investors are encouraged to check all of the key facts cited here from SEC filings and other sources prior to making any investment decisions.  The author’s opinion that the company will be able to resume dividend payments is based on assumptions that could be incorrect.