Copied below is the text of my letter to the independent directors of Colony Credit Real Estate.  It advocates for the directors and the corporation to take certain actions.  The text is not intended as investment research.

The text expresses my opinions based on publicly available facts, but my opinions are not themselves facts.  For example, I believe the assets of Colony Credit were misvalued from the time of its formation up to the release of 3Q19 financials, but I cannot prove it as a fact because the the details of the asset-by-asset valuation are not public.  Based on my belief that the assets were overvalued, I believe that management misrepresented their value and outlook to investors, but I cannot prove it as a fact because it’s possible that management did not understand the company’s assets.  The Directors should be able to research these areas of concern and take appropriate action to preserve the value of shareholders’ investment in the company.

The “Internalization” proposal received from Colony Capital would not be subject to a shareholder vote.  Therefore I encourage all shareholders of Colony Credit to directly contact the Independent Directors to express concerns about the proposal, the terrible record of the current management team, and the company’s future direction.

At the time of publication I own shares of Colony Credit Real Estate.  This disclosure should not be interpreted as any recommendation regarding investment in those shares.  My holding could change at any time after publication.

My family currently holds [some number] shares of Colony Credit Real Estate. I am writing to express my alarm at the collapse in the company’s value due to provisions and impairments that have reached $725mm (so far). Since launch Colony Credit has provided a uniquely poor total shareholder return of -24% compared to an average of +28% for seven peer companies: 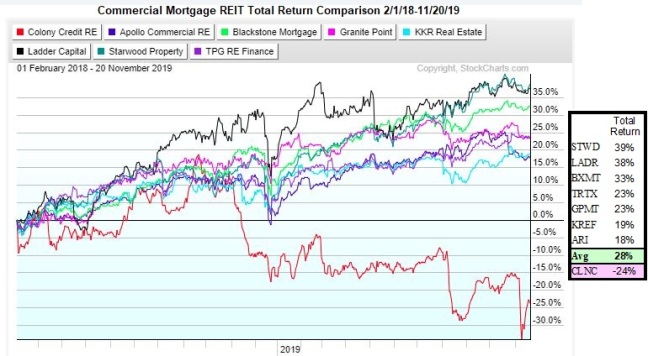 This letter will review the misvaluation of the company’s assets and misrepresentations by company management and then describe reasons for each of the suggested actions.

I believe that Colony Credit overstated the value of its assets since the time of its formation while CEO Kevin Traenkle and the management team told investors that the values were accurate. I encourage Directors to read transcripts of quarterly conference calls if you have not already done so.

At the time of CLNC’s formation the assets and liabilities of the acquired Northstar REITs were “measured at their respective fair values at the closing date of the combination”. Subsequent recognition of $725mm of loss provisions and impairments demonstrates those “fair values” were hugely overstated.

Prior to the formation of Colony Credit, all of its assets were either directly owned by Colony Capital or managed by Colony Capital through the two Northstar REITs. Colony Capital should have been very familiar with the performance of the entire portfolio and CLNC’s launch presentation boasted of the manager’s “world class expertise” and “veteran management team”. The manager claimed to follow a “proactive asset management approach for each investment” including:

On an ongoing basis Colony Credit has been required to report impairments and loan losses when operating performance indicates that the carrying values may not be recoverable. CEO Kevin Traenkle and CFOs Sujan Patel and Neale Reddington have certified that each quarterly financial statement “fairly presents, in all material respects, the financial condition and results of operations of the Company”.

Despite these obligations Colony Credit has gradually reported a total of $725mm of loss provisions and impairments relative to the “fair values” established 20 months ago. 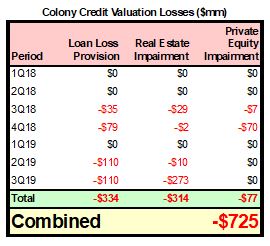 Conference call comments suggest that management either did not understand the value of these assets or misrepresented it to investors.

The largest contribution to the losses came from the NYC hotel loan package with an unpaid balance of $258mm backed by a single asset which the company has never disclosed, but which I believe is the Row NYC Hotel. The “fair value” of these loans was recorded at the full unpaid balance when Colony Credit was formed but the company subsequently recorded loss provisions of $208mm. If the asset backing these loans is the Row NYC Hotel then media reports in late 2017 that a portion of the rooms were being used by NYC homeless services could have signaled that operating performance was weak and loan recovery was in doubt. Instead management was slow to acknowledge the impairment of this asset:

The company reported a further impairment of $50mm on these NY hotel loans in 3Q19 but management did not provide any new comments.

FIVE DEMANDS, NOT ONE LESS

In light of the terrible performance of the company over the past 20 months under the management of Colony Capital and the conflicts of interest inherent in the “Internalization” proposal I strongly urge the independent directors to consider the following actions:

1 – Terminate the company’s management agreement with Colony Capital “For Cause” and without compensation on the grounds of “Gross Negligence”.

I believe Colony Capital significantly overvalued the assets of Colony Credit and the Colony Capital executives responsible for Colony Credit provided misleading comments about the value and outlook for those assets. This negligence resulted in a uniquely poor total shareholder return of -24% as the company’s market capitalization declined by approximately $1Bn.

2 – Demand refund of past management fees paid to Colony Capital that were based on overvaluation of Colony Credit assets.

Colony Capital’s overvaluation of Colony Credit’s assets led to payment of excessive management fees which were based on overstated shareholder’s equity. I estimate that if $725mm of losses and impairments had been correctly reflected in Colony Credit’s financial statements at the time of its formation then cumulative management fees paid would have been $15mm lower.

3 – Engage independent financial advisors to seek the sale of the company or its assets.

I believe the large gap between the price of Colony Credit shares and their reported book value demonstrates the complete lack of investor confidence in the company, its manager Colony Capital, and CEO Kevin Traenkle.

The best way to protect the value of the investment that shareholders have made in Colony Credit would be to sell the company or its assets to a third party. I draw your attention to a comment by KBW analyst Jade Rahmani on the 3Q19 Colony Capital conference call:

“I’ve now followed this company since 2009 and seen a multitude of these value-destroying transactions. And I think you might want to consider whether a third-party would also make sense and weigh the cost benefit of such interest if we were to materialize. I believe that there are numerous debt vehicles that are in a private format right now that would value highly permanent capital that a mortgage REIT offers, and I think that should also be evaluated.”

The management team from Colony Capital is responsible for the huge losses incurred by Colony Credit and its shareholders. Internalization would not address the problem that this team has done a terrible job.

External management is the industry standard for commercial mortgage REITs. Colony Credit peers Starwood, Blackstone, Apollo, TPG, KKR, Granite Point, and Ares are all externally managed. There is no evidence that investors would prefer an internal structure for Colony Credit.

The internalization proposal is very similar to the 2015 acquisition by Colony Financial of its manager Colony Capital. By any measure it was a disaster as the share price (adjusted for the Northstar merger exchange ratio) of the combined company has fallen 73% since internalization closed on 4/2/15.

The performance of Colony Capital’s external asset management business fell far short of the projections provided to Colony Financial in justifying the 2015 internalization. In the 2015 merger proxy Colony Capital estimated that it would receive $102mm in “Base Management Fees From Private Funds” in 2016 (DEF14A filed 2/24/15), but actually earned only $68mm (10-K EX99.11 filed 2/28/17). Financial projections provided in connection with the merger of Colony Capital, Northstar Realty, and Northstar Asset Management were even more ridiculous. The three companies projected total standalone “Cash Available for Distribution” of $933mm for 2018, but ended up reporting “Core FFO” of only $333mm after the merger.

The Internalization Proposal received from Colony Capital is motivated by its promise to its own investors to divest itself of non-technology related assets. Colony Credit has no similarly compelling need to consummate any transaction.

The senior management team led by CEO Kevin Traenkle that Colony Capital proposes to transfer to Colony Credit has been responsible for $725mm of provisions/impairments and the loss of about $1Bn in market cap. This group has been a liability rather than an asset.

Investors did not reward the first Colony Capital internalization transaction and there is no reason to expect a different result this time. There is no investor pressure for internalization and Colony Credit’s peer companies with the highest market valuations are externally managed.

Colony Credit’s Directors and advisors should protect CLNC investors from earnings shortfalls related to any assets acquired from Colony Capital by making 100% of any consideration payable to CLNY contingent on actual future performance. Colony Capital’s letter suggested that consideration could be paid “possibly over time”. The amount of the payment should also be variable.

Thank you for your attention to this letter. I plan to post it online to encourage fellow shareholders to make their opinions heard regarding the company’s performance and future direction.

6 thoughts on “5 Demands, Not 1 Less: A Letter To The Independent Directors Of Colony Credit Real Estate”