China’s National Bureau of Statistics (NBS) released its monthly report on home sale prices (LINK – only published in Chinese this month).  The prior segregation of “15 Hot Cities” in the NBS report has been removed and suggests that price restraints have diminished in importance as a policy goal.  It is still useful to monitor trends in these major markets. 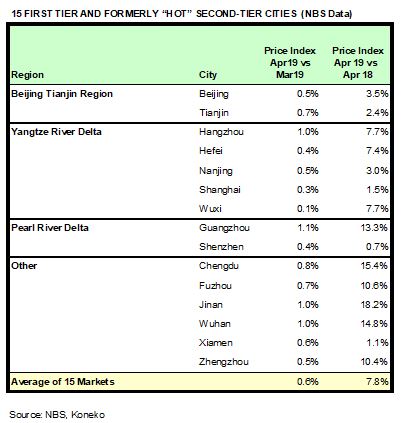 Intense market restrictions kept prices flat for many months in these key markets, but the average has recently been boosted  by a clear rebound in some of the Tier 2 cities (e.g. Jinan, Chengdu, and Wuhan) and emerging strength in top markets (Hangzhou and Guangzhou).  It’s possible that some of the reported price increase could reflect sales mix as cities may have relaxed registrations of high priced sales. 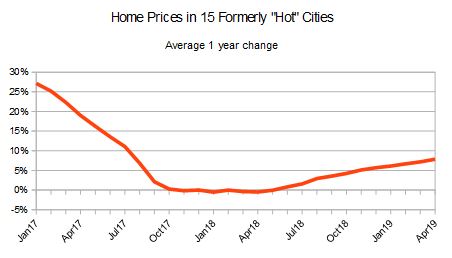 Segregating the 10 strongest and weakest of the 70 markets covered by NBS data shows a few large Central cities (Xi’an Shijizhuang and Jinan) on the gainers list along with policy beneficiaries (Haikou and Dandong) and former laggards (Hohhot etc…)  Xi’an has attracted population inflow (and homebuyer demand) with generous benefits for skilled workers (see WSJ: A Tug of War for Elite Skills Is Raging Across China.  The weakest prices have been in large and formerly hot markets with strong economies, growing populations, and cultural appeal that should sustain long-term housing demand.

Even the weakest market in the 70 city survey has seen a price rise over the past 12 months.  The media became very excited last fall when discounts offered by developers in some small cities led to protests by prior buyers who paid more (LINK), but it did not prove to be a meaningful national trend.  Easing of downpayment requirements, mortgage rates, and resale limitations is occuring depending on local conditions.  Recent price strength has also led to a renewal of central government caution against speculation and four cities (Dalian, Nanjing, Suzhou, and Foshan) received warnings from the Ministry of Housing and Urban-Rural Development (LINK).

Trade conflict has a negative impact on consumer sentiment and housing demand in China, but this is substantially offset by expectations that the government will respond to a decline in exports by easing financial conditions and loosening property market restrictions in order to stimulate residential investment and maintain overall economic growth within the expected range.