Contract sales guidance provided with 3Q earnings was US$1,158mm which would be the company’s best quarterly performance by a large margin.

Net Income guidance is for “an increase of 15-20% over 2017”.  2017 GAAP Net Income was US$79.8mm so guidance could mean 2018 profit of US$92-96mm.  9M18 GAAP Net Income attributable to shareholders of $3mm included ($26mm) of fx translation loss which was not incorporated in guidance.  With CNY approximately unchanged in 4Q18, 4Q GAAP net income could be $63-67mm.  2017 results included a non-recurring US$16mm bond redemption penalty.  It would be helpful if future earnings outlook was provided as an actual amount rather than a percentage change.

Shareholders Equity (book value) was reduced by US$280mm in 2018 due to adoption of ASC606, but this amount should be recaptured over time as the related apartments are completed and delivered to buyers.  Equity should increase by more than the profit reported on the income statement and balance sheet ratios should improve.

Xinyuan’s property management unit is poised for very rapid growth that could nearly triple its value.  The company presentation mentions “31.61mm sqm of properties under management” which is far larger than the 11.1mm sqm disclosed in the 2017 20-F.  Discussion with Xinyuan staff suggests the larger number includes properties for which Xinyuan has signed contracts to serve as manager, but which have not yet finished construction and been delivered to the customer.  Most of the HK-listed companies describe this as “Contracted GFA” and it provides some visibility into future  revenue growth.  Colour Life provided this explanation:

If Xinyuan’s  contracts covering 31.61mm sqm all transition to fee-paying property under management then revenues, income, and fair value will increase by about 3X.

A prior article (Xinyuan Real Estate Update: Did you know about the 75Bn RMB investment plan?) described agreements covering nearly 20mm sqm of potential development (over 3X larger than Xinyuan’s disclosed landbank).  Access to land through these projects could lead to improved long-term profitability and reduced exposure to real estate market cycles.

Plenty of information about these projects is public in China, but Xinyuan has been reluctant to include them in official investor disclosures because the agreements are not mutually binding.  Xinyuan and the city governments are not contractually committed to the full development plans.

Xinyuan believes that award of the first land use rights for a project is a major milestone.  As of 3Q18 this step was completed at Zhengzhou Hangmei International Smart Town and Dalian International Health & Technology Town.

Xinyuan’s intention to proceed with these developments appears to play a very material role in the company’s future potential even if there is not yet a binding commitment for individual projects.  It would be helpful to investors if the company could find the right language to describe the current status of these Technology Towns, any progress during 4Q18, and future goals.

Xinyuan grew its assets by US$2,454mm in 2018 (to 9/30) even as equity fell by US$400mm (largely due to adoption of ASC 606).  Poor investor sentiment caused by the weakening Chinese economy and uncertainty from the “trade war” led yields on bonds issued by Chinese property developers to jump in 4Q18.  The market has recovered over the past eight weeks and many issuers seized the opportunity to sell new bonds in order to refinance upcoming maturities.  Unfortunately Xinyuan’s existing bond prices remain at levels where refinancing would be prohibitively expensive.

Looking at the details of Xinyuan debt in 6/30/18 financial statements:

If Xinyuan is able to issue a new bond to repay the August 2019 maturity it will probably carry a high coupon (13-15%) and only cover a short term-term (1-2 years) which would simply add to the refinancing burden in 2020-2021.  The company may be tempted to issue convertible debt with an 8-10% coupon and an all-in cost of capital of 15-20% due to equity dilution.  Higher interest costs will cut into profitability until Xinyuan is able to improve its credit quality through deleveraging.  Some Xinyuan assets that are potential sources of funds:

Xinyuan added considerably to its landbank during strong market conditions of 2017 and 1H18 in a belief that a larger land reserve would provide greater visibility to lenders and improve access to financing.  So far it does not seem to have worked. 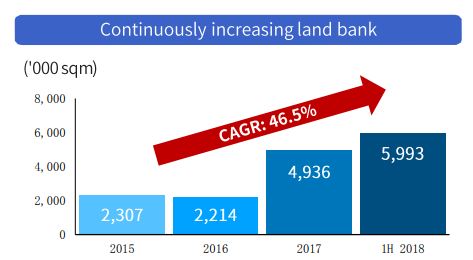 The real estate market in China has weakened which may lead to slower than expected sales and lower than expected margins from these recently acquired projects.  The weaker market provides an opportunity for attractive land acquisitions by patient and well-capitalized buyers, but not Xinyuan.  Xinyuan may have repeated its blunder from 2H13-1H14 when it overinvested at a cyclical peak.  The 20-F filing’s project gross margin disclosures associated with percentage-of-completion accounting will provide some insight into whether the company will earn a fair return on its expanded development pipeline.

How did they screw this up so badly?  In 2014 Xinyuan’s New York office manager estimated Oosten project costs in a range of $240-250mm.

In 2015 Xinyuan’s CFO estimated the project would generate a 70% IRR:

Oosten costs have soared and sales over the past 18 months have been a negative gross margin:

Oosten-related claims have been filed against Xinyuan by the general contractor ($26.4mm), the architect ($2mm), the sales agent (Halstead $1.3mm), and now the Oosten resident condo board has sued for $253,000 in unpaid common charges (LINK).

Ideally the capital and profits from a successful Oosten development would have been recycled into the newer projects in Midtown and Flushing.  Instead Xinyuan still has capital tied up earning no return in Oosten, must put up additional funds to advance the other sites, and may have earned a poor reputation as a project sponsor. 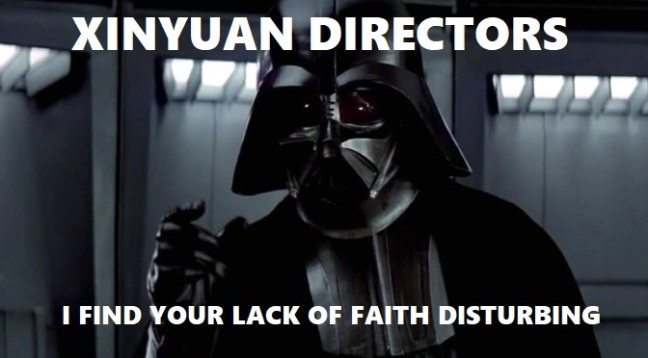 As a “foreign private issuer” Xinyuan and its executives are exempt from SEC requirements to report transactions in Xinyuan securities, although large shareholders such as Chairman Zhang are still required to file and amend forms 13 D/G.  Ownership disclosures in the annual 20-F filings show that 5 insiders made substantial sales during 2017 and 5 held no shares at year-end. 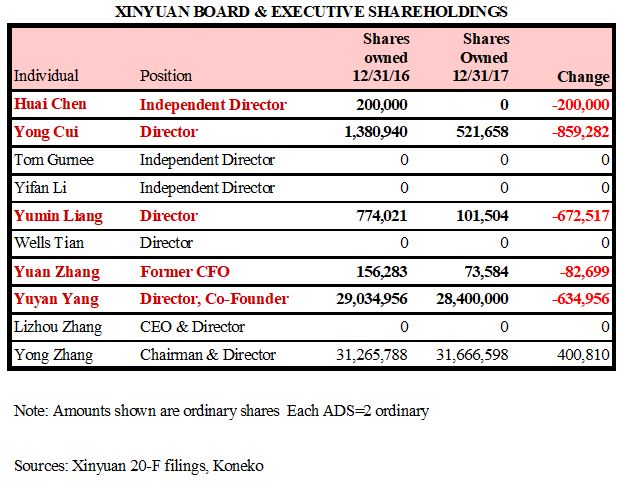 Non-shareholding directors participate in making major decisions affecting shareholders without sharing in the consequences.  Did any Directors have enough confidence to purchase shares when the price dropped to a two-year low in 2H18?

At the time of publication the author held an insignificant position in Xinyuan shares.  The author does not make any recommendation regarding any investment in any company mentioned here.  Investors should check all of the key facts cited here from regulatory filings and other public sources prior to making their own investment decisions.