Intense market restrictions kept prices flat for many months in these key markets, but the average has been boosted  by a clear rebound recently in some of the Tier 2 cities (e.g. Zhengzhou, Jinan, Chengdu, and Wuhan).

Segregating the 10 strongest and weakest of the 70 markets covered by NBS data shows that most of the cities with the strongest recent prices include former laggards in regions with weaker economies and stagnant population, but gentler application of housing market policies.  The weakest prices have been in the largest and formerly hottest markets, particularly in the Yangtze River Delta area.  Those cities have strong economies, growing populations, and cultural appeal that should sustain long-term housing demand. 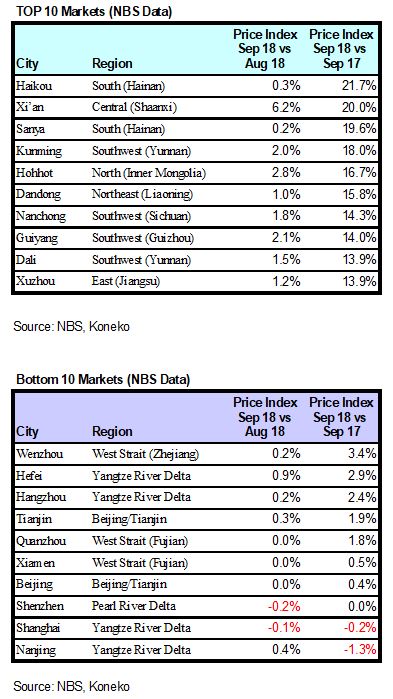 Strength in Haikou and Sanya is explained by promotion of a new free trade zone and recently attracted negative attention.  I’m not aware of any special developments to explain the large September price increase in Xi’an.  This analysis suggests that it may be due to a shift in the volume of high-end vs middle units sold and uneven recording of sales transactions.

NBS data shows that rapid price increases are no longer a problem in major cities.  However price appreciation was tamed using policies (e.g. high downpayment requirements and increased mortgage rates) that made housing less affordable for ordinary people.  At the same time strict regulations of presale prices made speculation more attractive for wealthy investors because risk is reduced when you are able to buy at artificially suppressed levels.

Strong economic conditions in 2017 and early 2018 gave the government an opportunity to restrict unhealthy real estate speculation and excessive leverage.  A recent softening in the economy and uncertainty resulting from trade tensions have led to clear shift towards fiscal and monetary easing that seems to have been accompanied by a relaxation of housing regulations without any formal announcements.  Suggestions in recent days that restrictions on sale prices may be eased in Guangzhou attracted a lot of attention and contributed to strong performance of China real estate developer shares on Monday 10/22.

Rock-throwing protesters (LINK) at a Country Garden development in Shangrao (Jiangxi province) earlier this month attracted global media attention .  Homeowners were upset at discounts being offered to later buyers.  Real estate is cyclical and home prices fell in 2012 and 2015, but the government may be reluctant to tolerate a downturn now while trade conflict is challenging public confidence in the economic outlook.  Shangrao is a very small and unimportant city, but to the extent that weakness spreads to major cities the government has many means to stimulate demand through easing of current market restrictions.  New personal income tax deductions announced in recent days for mortgage and rental payments should improve sentiment.

Media coverage of China real estate usually highlights the average of the price changes from 70 cities (example).  This is easily calculated from the NBS report, but equally weighting 70 cities exaggerates the importance of smaller cities with weaker economies and lower home prices.  For comparison, the top US metropolitan markets are Los Angeles and New York City while the 69th and 70th are Albany and Tuscon.