Background of the expired agreement

No subsequent changes have been disclosed so it appears that the agreement expired on August 16, 2017.

However China XD’s 10-K filed in March 2018 (and certified by Chairman Han) describes the consortium as active: 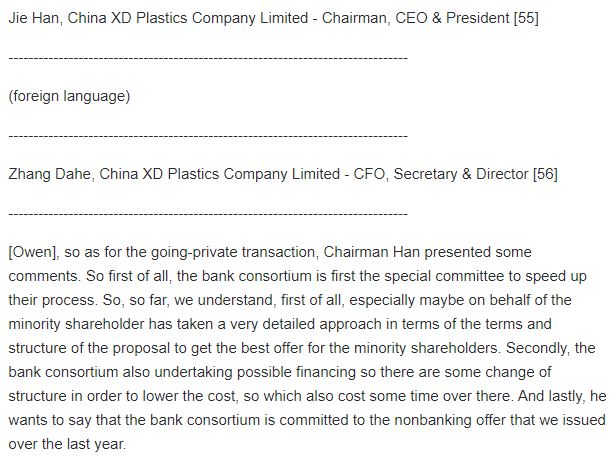 If the consortium agreement has been extended then Chairman Han and MSPEA may need to amend their 13D filings to disclose their continued cooperation as a group seeking to acquire CXDC.  A March 2015 SEC enforcement action emphasized the importance of timely amendments to 13d disclosures: “Investors are entitled to current and accurate information about the plans of large shareholders and company insiders,” said Andrew J. Ceresney, Director of the Division of Enforcement.

Chairman Han deserves credit for trying to share some comments during the conference call, but his vague description only highlights that “current and accurate information” has not been disclosed to investors in an official form such as amended 13D filings.  This failure follows prior failures to make timely disclosure of the company’s Nanchong and Harbin expansion plans (see Koneko articles for details) and to form a Special Committee composed of Directors whose independence is beyond reproach.  These failures present significant legal obstacles to completion of any privatization transaction that might still be under consideration.

Chairman Han is Free to Negotiate with Other Parties

Expiration of the Consortium Agreement means that Chairman Han is no longer bound by the exclusivity provision and is free to discuss alternative transactions with parties besides MSPEA:

Chairman Han recently hosted a high level delegation from Sinochem Plastics, a division of a leading state-controlled enterprise, at which the two parties discussed opportunities for business cooperation.

An example of an a possible alternative transaction could involve Sinochem acquiring the CXDC shares currently held by MSPEA.  Benefits of such a transaction would be:

This possible transaction with Sinochem is presented as an example of new opportunities available to China XD and Chairman Han following expiration of the MSPEA Consortium agreement.  I am not aware of any evidence that such a transaction has been discussed with Sinochem.  It’s likely that there are several other parties that might be interested in such a transaction and partnership with CXDC.  Chairman Han could not force MSPEA to sell its shares to Sinochem or any other party, however MSPEA is obligated to sell its stake to somebody due to the liquidation of its 2007 fund after its 10 year term.

Autohome, a Chinese portal for auto-related information and services, suggests a path that CXDC may follow.  In April 2016 Autohome’s CEO and three private equity firms submitted a preliminary non-binding offer to buy the company for $31.50/share (LINK).  At that time a large stake was held by Australian telecom operator Telstra which made a separate agreement to sell its shares to Ping An Insurance Group (LINK).  Ping An did not support the privatization offer which was withdrawn in October 2016 (LINK).  Since then Autohome’s business has continued to grow with enhanced opportunities available through cooperation with Ping An and shareholders have enjoyed appreciation to a price over 3X the 2016 buyout offer. 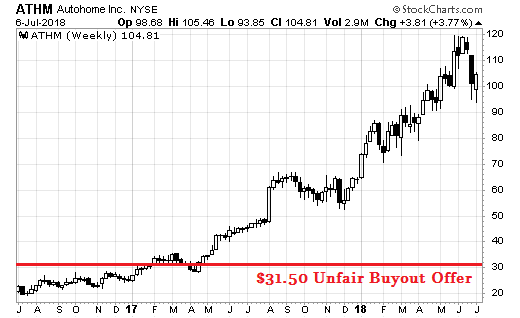 China XD continues to trade at a large discount to its China-listed peers even though their valuations have fallen amid weakness in China’s domestic equity markets (prices as of 7/6/18):

Additional background on competitive position and strategy of these companies was in prior Koneko articles.   Kingfa’s bond prospectus (page 1-1-93) listed its primary domestic competitors as Xinda, Pret, and Silver Age.  The limited number of competitors in production of advanced plastics enhances Xinda’s appeal to potential strategic investors or acquirors.

Chinese media recently reported that Xinda projects sales of 20Bn RMB in 2020.  This is close to the US$3.65Bn that Jason Cooper of Stuyvesant Capital Management estimated the company could generate in 2021.  The company’s sales target adds credibility to Jason’s estimate of 2021 potential net income of US$502mm ($7.66/share).  The company’s current job listings seem to confirm aggressive sales expansion.  Any fairness opinion issued in connection with a privatization agreement will place significant reliance on management projections of future operating results.  Duff & Phelps, the financial advisor retained by the special committee, should question any figures that are out of line with company projections mentioned in recent articles.

Awareness of the adverse environmental impacts of traditional plastics has gained widespread attention this year (e.g. National Geographic: Planet or Plastic?).  Xinda provided only brief and vague explanations for its December 2016 decision to build two large new facilities for production of bio-degradable plastics, but the company appears to have correctly perceived the huge potential demand for these new materials.

Conditional terms used in the article such as “may” “could” “seem” and “appear” indicate the author’s subjective opinion based on the facts presented.  Readers are encouraged to check the facts themselves rather than relying on the author’s opinion.  Descriptive terms such as “unfair” indicate the author’s subjective judgment based on the facts presented.  These descriptions are made according to the common usage of these words rather than any specific legal standard of unfairness that may be applied in any legal jurisdiction.

The author has made his best effort to accurately summarize facts publicly available as of the date of publication (07/09/18).  The author does not want to spread errors or misinformation.  A link to this article has been sent to CXDC CFO Taylor Zhang using his email address in company press releases cxdc@chinaxd.net.  If CXDC, or anybody else, can provide public information as of 07/08/18 which shows there are errors in the text then corrections will be made as promptly as possible.

Aside from corrections to any errors discovered in this article, the author may not release new public commentary about China XD Plastics.  His willingness to do so will depend on future developments which cannot currently be predicted.

Seeking Alpha poster “goebert” deserves credit for drawing attention to the expiration of the Consortium Agreement.

UPDATE: 7/14/18  The article was edited to add the explanation that a strategic investor such as Sinochem might be willing to pay a premium price in order to acquire MSPEA’s large stake in CXDC.

Interested parties who wish to communicate privately about China XD Plastics may contact the author at konekoresearch (at) gmail.com