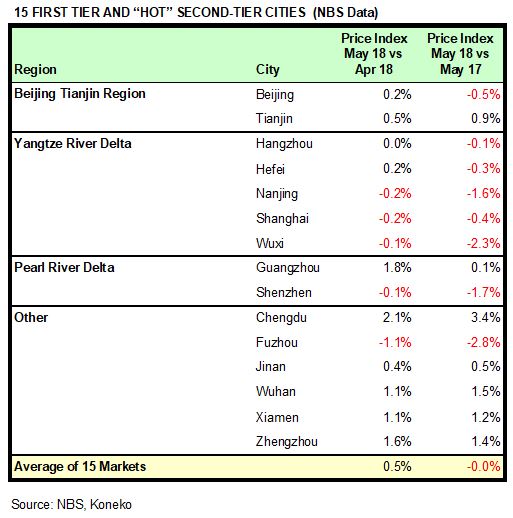 Intense market restrictions have kept prices flat for many months in these key markets: 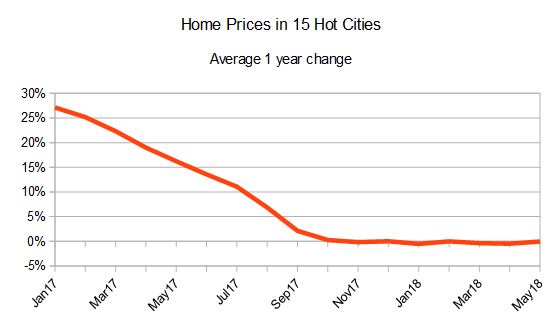 Segregating the 10 strongest and weakest of the 70 markets covered by NBS data shows that most of the cities with weakest prices were the largest and formerly hottest markets.  Those cities have strong economies, growing populations, and cultural appeal that should sustain strong long-term housing demand.  The cities with the strongest prices include former laggards in regions with weaker economies and stagnant population, but gentler application of housing market policies.

May strength in Dandong is explained by that city’s role as a key conduit for trade with North Korea that may benefit from an easing of sanctions.  Strength in Haikou is explained by promotion of a new free trade zone.

NBS data in major markets show that rapid price increases are no longer a problem.  However price appreciation was tamed using policies (e.g. high downpayment requirements and increased mortgage rates) that made housing less affordable for ordinary people.  At the same time strict regulations of presale prices made speculation more attractive for wealthy investors because risk is reduced when you are able to buy at artificially low levels.   Price restrictions have created a sense of scarcity that leads to hoarding of supply by developers and urgency among buyers (see SCMP: A Chinese homebuyer’s ordeal to secure a home that she didn’t like).  Several policy initiatives may address these problems:

Relatively strong economic growth (GDP +6.8% yoy in 1Q18) affords China the opportunity to reform its housing markets without excessive concern about possible adverse impacts on GDP or financial stability.  If growth were to weaken over the next year, perhaps in connection with trade tensions, then relaxation of housing market restrictions would become more likely.  An April cut in banks’ Reserve Requirement Ratio was widely seen as a signal that monetary policy could become more supportive.