This article will try to summarize key points from my March “Merger Math” article, the many good  comments posted on Seeking Alpha, and subsequent developments. 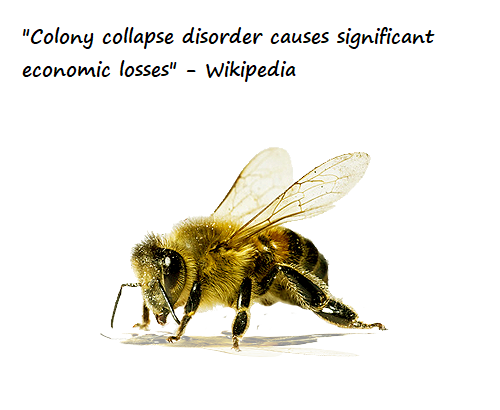 REVIEW OF GUIDANCE AND FORWARD-LOOKING STATEMENTS

Colony provided several forward looking statements in its 4Q17 press release and conference call which the following table attempts to assemble into a forecast of 2018 FFO.  The 1Q estimate is a conservative combination of the full year estimate and the 4Q17 run rate.  Conviction in these forecasts as low, however the individual line items may provide helpful context for understanding the actual 1Q18 results when they are reported. 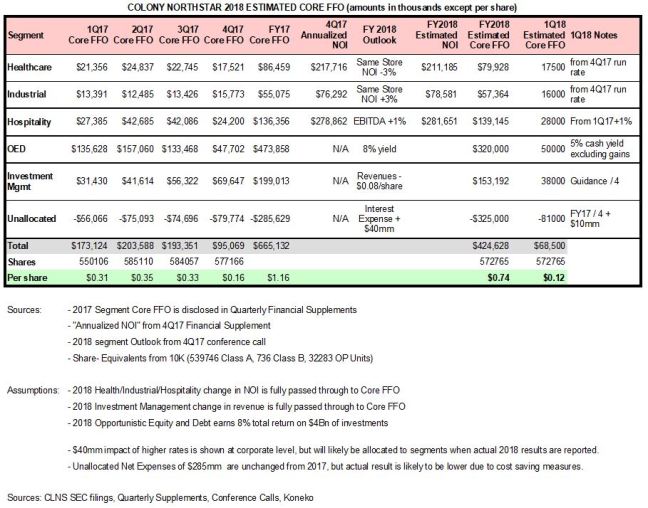 Background discussion of guidance and estimates:

Peer results suggest that Industrial and Hotels may beat CLNS guidance.  Hotels are benefiting from a strong economy and price inflation.  The biggest uncertainty in the earnings estimate is the “Unallocated” segment.

An asset manager cannot build a business on a promise to deliver consistently high returns, but it should be able to gain investor trust by reliably communicating and executing its strategy.  Some CLNS segments get it: 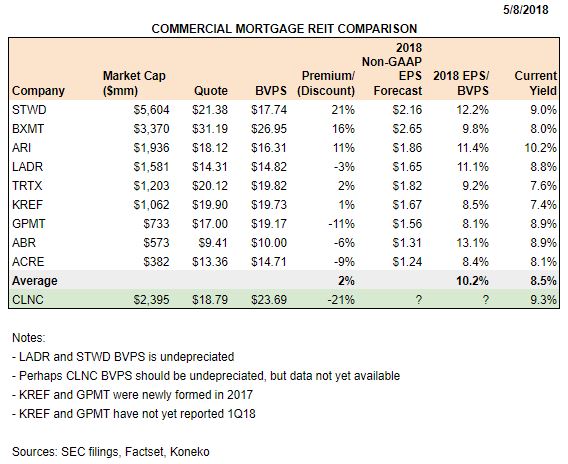 When the three-way merger was announced Colony CEO Richard Saltzman said it was too early to tell what the company’s main businesses would be (transcript 06/03/16):

I interpreted these comments to mean that Healthcare and Hospitality (over 50% of the company’s assets) were deemed non-core lines of business that the company would try to sell.  Some people disagreed and argued that “de-emphasis” just meant selective sales of individual underperforming assets.  It’s not clear.

The company’s value is confusing due to the history of corporate transactions and reluctance of CLNS management to provide clear guidance.  The segment reporting is unclear due to overlapping definitions.  Is investment management a vertical?  Or should it be a horizontal within each vertical?  Is Europe a “Vertical”?  Or a “Horizontal” present in every “Vertical”?  Or a “Space” with its own Verticals and Horizontals?  Co-investment in the business units could provide third-party validation of how much these segments are worth.  Formation of CLNC has done that with a portion of the “Opportunistic Equity and Debt” assets, but there’s no apparent progress and perhaps no plan for Health and Hotels.

The author is a shareholder of CLNS CLNC NRE and LADR.  The author does not make any recommendation regarding any investment in any company mentioned in this article.  Investors are encouraged to check all of the key facts cited here from SEC filings prior to making their own investment decisions.