This article updates my commentary from June 2017 China Automotive Systems Buyout Price Should be Raised to at least $7.50.  China Automotive Systems has made no comment on the status of Chairman Chen’s offer since it was modified in late August 2017 to add North Haven Private Equity (a unit of Morgan Stanley) to the buyer group (link to revised offer letter).  The company has not held an earnings conference call since 8/10/17.

China Automotive Systems (CAAS) has a long public company history following its US listing in 2003.  It was formed through merger of suppliers to domestic Chinese automakers and has maintained good corporate relationships with these key customers.  A 2014 Geoinvesting article  provides a nice introduction to the group.

Steering systems have undergone several major transitions from manual to hydraulic power (HPS) to electric power (EPS) and will play a key role in future Advanced Driver Assistance Systems (ADAS).   Each new generation improves safety and fuel efficiency, but at higher upfront cost per unit.  Each new generation of more sophisticated components increases the competitive importance of technology.  ADAS will bring higher margin and profit potential, but will require large R&D expenditure and could be disruptive to existing suppliers.

As a small player in global markets CAAS has a significant opportunity to gain market share, but faces a significant challenge in keeping up with product development ability of larger competitors.

The global steering market has a limited number of major participants:

In addition to CAAS, there are several smaller domestic Chinese suppliers including Zhejiang Shibao and Xinhang Yubei.

Passenger car sales rose slightly in China for 2017 due to the expiration of a temporary reduction in the tax rate  on new vehicles (CAAM sales report).  Commercial vehicle sales grew more quickly with support from a stronger property market and tightened enforcement of regulations against vehicle overloading.

Shibao noted that it achieved higher EPS sales, but earned no profit “due to the relatively high cost of certain projects at the early stage of mass production” (link to 2017 results announcement).  Nexteer attributed lower sales to “decreased customer demand schedules as our major customers in the segment produced at levels
below the industry average” (link to 2017 results announcement).  CAAS brief announcement did not explain its weak China result.

Comparison of CAAS and Nexteer

Nexteer’s rapid growth since it came under Chinese control makes it the most useful benchmark for CAAS performance and valuation. 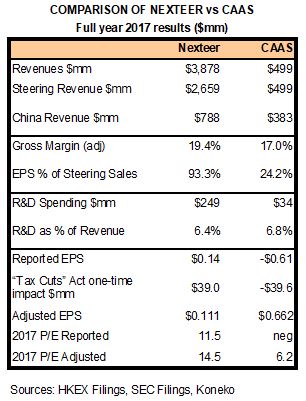 Two adjustments have been made to present 2017 operating results on a comparable basis.

Nexteer’s rapid growth has eroded the advantage CAAS once held as the leading domestic producer of steering systems.  Nexteer has a higher annual R&D budget and more advanced product line (almost all sales from EPS).  CAAS margins show that it continues to operate successfully at the lower end of the market.

In contrast to its stagnant China sales, CAAS has enjoyed rapid growth in international revenues. 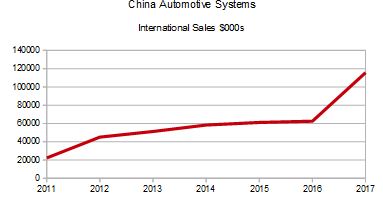 Chrysler North America is CAAS largest customer and accounted for 14.3% of total 2017 sales.  Significant sales to Ford began in late 2016 and CAAS has also established a subsidiary in Brazil.

Threatened trade conflict poses a significant risk to CAAS growing export business, however the initial list of products for which the United States Trade Representative has proposed increased tariffs does not include most auto parts.  Various types of vehicles are included (headings 8701-8705), but parts (heading 8708) are not.  Anything everything or nothing in these proposals could end up being implemented.  CAAS seems to be unaffected, but it would be difficult to assess the fair value of the company until US policy is clear.

These goals have not been mentioned in any regulatory filings or shareholder communications. 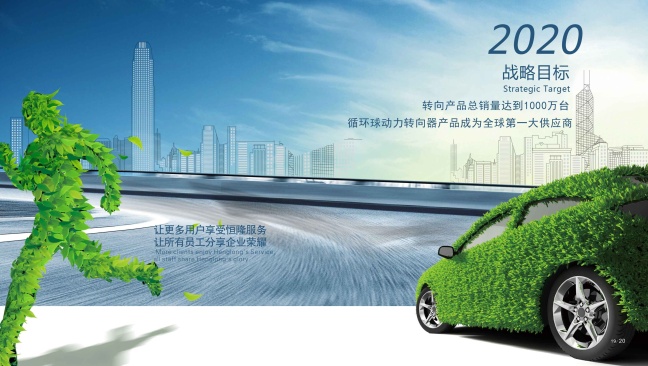 China Automotive Systems came public in the US through a 2003 reverse merger with a Delaware Corporation.  The company did not accrue US tax liability on the earnings from its Chinese operating business because it intended that those profits would be permanently reinvested outside the US.  Unfortunately the “Tax Cuts & Jobs Act” now requires payment of a one-time “transition tax” on those past foreign earnings.  The calculation of the liability is subject to publication of IRS guidance, but all of the larger US incorporated Chinese businesses (e.g. YUMC SOHU CXDC and CAAS) with higher quality auditors (KPMG and PWC) each accrued a large estimated liability.  Actual payment can be spread over eight years beginning in April 2018.

It will be difficult determine the fair value of CAAS until there is greater clarity about the final liability for this transition tax.  The IRS has updated guidance several times and it’s possible that the company will know soon whether any revision to its initial estimate is appropriate.  The 10-K also mentions a risk that some future foreign earnings could be subject to US tax:

CAAS has provided guidance for 2018 sales of $510mm.  The company has not given an outlook for margins, but they have been fairly steady over time. 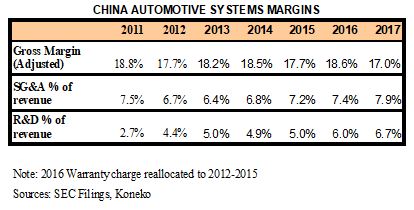 The company attributed its lower 2017 gross margin to “product mix change”.  If lower gross margins and higher R&D expense continue in 2018 then earnings could drop to $0.54/share 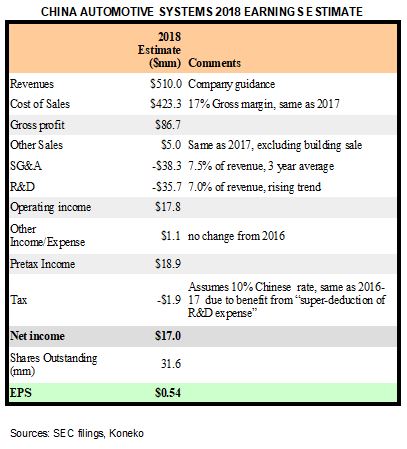 The “transition tax” liability was unwelcome news, but likely increases the motivation of CAAS management to eliminate the US holding company and the related risk of future tax and regulatory surprises.  The addition of an experienced private equity firm to the Buyer Group increases the likelihood that a deal can be steered to completion if the potential return is attractive.  My guess is that discontinuation of quarterly conference calls implies that CAAS does not expect to continue as a public company.

If there are no new significant adverse changes in company performance, tax, or tariffs then my guess is that within 2-3 months the Buyer Group will submit a new preliminary non-binding offer at a lower price.  Then the Special Committee will negotiate a final price at a premium to that revised offer.

The author is a public shareholder of CAAS.  The author does not make any recommendation regarding any investment in any company mentioned in this article.  Investors are encouraged to check all of the key facts cited here from SEC filings prior to making their own investment decisions.

If any company mentioned in this article can point out any factual errors in the text using public information as of 04/12/18 then corrections will be made as promptly as possible.

Interested parties who wish to communicate privately about CAAS may contact the author at konekoresearch (at) gmail.com