Xinyuan may continue trading at the low end of peer valuation multiples until the company improves its profitability or gives investors confidence that improvement will occur.

Xinyuan’s 4Q17 contract sales rose 72% from one year ago and exceeded the guidance of 4.6-4.8Bn RMB ($697-727mm) provided during the 3Q17 conference call.  CEO Zhang attributed the better than expected result to “steady demand”. 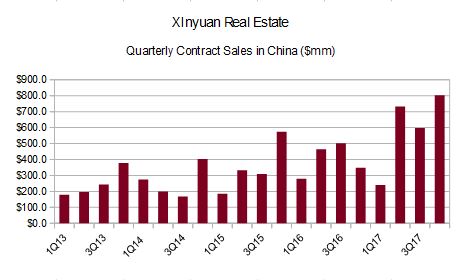 Conclusions from examination of 4Q17 contract sales by project: 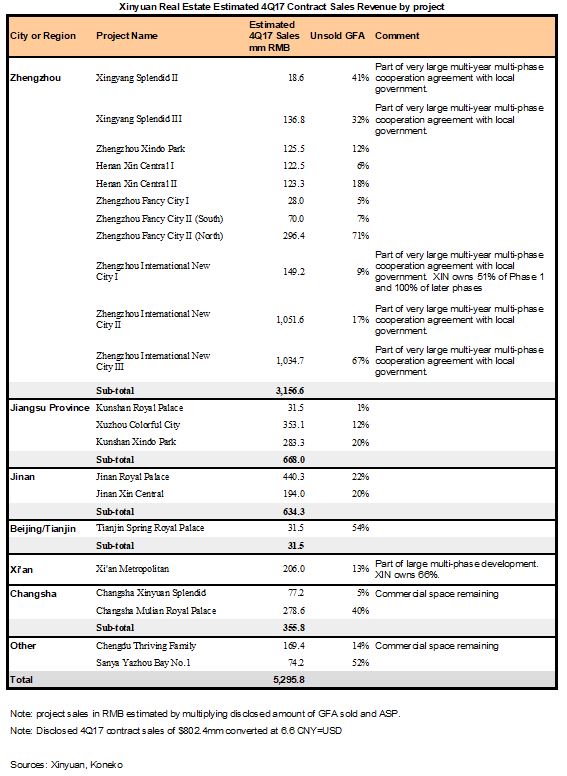 An explanation of the difference between “contract sales” and revenues is at the end of the article.

Only 5 units sold at the Oosten Project in New York

5 units were sold in 4Q17 for proceeds of about $6mm leaving 44 units with an average carrying value of about $3.1mm each.  Xinyuan did very well to acquire the land for this property in 2012 in a neighborhood that has since seen large appreciation of real estate values.  However the company appears to have misread the potential demand  for the highest priced units in that area.  It would be very beneficial if the remaining units could be sold so that capital could be recycled into the Manhattan and Queens projects now under development.

Xinyuan has not disclosed shares outstanding at 9/30 and 12/31 so per ADS amounts must be estimated. 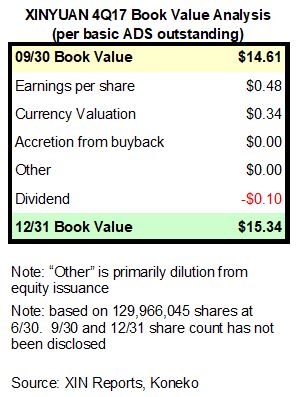 The company did not repurchase any shares in 4Q17 and is unlikely to resume repurchase while leverage is at a high level.

Xinyuan added significantly to its debt during 2017, largely in order to increase its landbank from 2.2mm sqm at 12/31/17 to 4.9mm sqm at 12/31/17.  2017 sales were about 1.4mm sqm so the year-end land reserve will cover over 3 years of sales at the current pace.  The land reserve does not include the full area of projects covered by planning agreements with local governments for which individual land parcels have not yet been transferred.  These agreements could potentially add 3-5mm sqm of additional buildable area.

Xinyuan’s leverage is above its historical average, but within the range of peer companies: 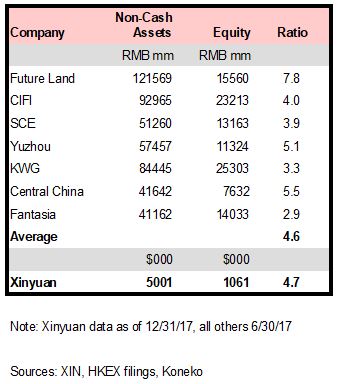 Unfortunately Xinyuan provided almost no explanation for its aggressive asset expansion.  CEO Zhang said: “we believe it is important for us to add to our pipeline, so as to support long-term growth”.  The press release mentioned that four of the six projects added in 4Q17 will be developed jointly with other companies.  It’s difficult for investors to feel confident in this commitment of capital without any information about the locations, cost, ownership, or development plans.

CFO Zhang said: “I think, we are going to have a very nice growth in year 2019”.  It’s possible that a larger and more diverse landbank will provide a basis for higher earnings.  But it also carries the risk that Xinyuan may have repeated its blunder from 2H13/1H14 when it overinvested at a cyclical peak.

No meaningful disclosures about the company’s new business initiatives

Technology Strategy.  Xinyuan issued a press release Xinyuan Real Estate Co., Ltd. Announces Update on its Technology Strategy which contained almost no information that was not already publicly available.  CFO Zhang was given the opportunity during the conference call to explain the strategy in more detail, but said only “We hope that the development of the blockchain will help us to find new opportunities in China’s real estate and also some other industries”.  She explained that the company would report if there were any “material developments”.  Lack of capital markets experience among Xinyuan executives may have resulted in a narrow focus on regulatory disclosure obligations rather than broader disclosure opportunities that would improve investor understanding of the company.  If Chairman Zhang is giving public speeches in China about the company’s technology strategy then there is no justification for withholding the same information from investors.  If CFO Zhang is unfamiliar with the details of the blockchain initiatives, home robots, and cloud ERP system then it would be beneficial to Xinyuan if another executive were available on the conference call to describe those topics.

Business Parks.   Xinyuan’s Chinese public relations announcements have described parks under development in Zhengzhou and Qingdao/Pingdu (“Peanut Town”).  The company has also negotiated with local governments regarding potential parks in Tianjin, Changsha, Wuhan, and Dalian.  The first phase of the Zhengzhou Hangmei Project now appears on the company’s list of “planning stage projects”, but no information about the nature of this project has been shared with investors.

It’s possible that these new business initiatives could provide Xinyuan with an enduring competitive advantage and growth opportunities independent of real estate market cycles.  But without better communication it’s impossible for investors to know whether technology will play an important role in the company’s future development or if these initiatives are just hobbies that Chairman Zhang is pursuing in his semi-retirement.

High Leverage and Poor Communication is a Risky Combination

Many of Xinyuan’s peers took advantage of their strong share prices to raise equity in recent months.  Xinyuan could use more capital to support its ambitious growth plans, but low valuation and lack of support from institutional investors make it difficult for the company to sell shares.  It appears unlikely that Xinyuan will continue its share repurchase plan until its leverage declines or profitability improves.  If the China real estate market enters a cyclical downturn then the current dividend may be at risk.

In the absence of a clearly articulated corporate strategy, Xinyuan shares may continue to trade at a larger discount to book value than peers.  It seems especially unfortunate that Xinyuan has so far squandered the opportunity to benefit from tremendous investor interest in blockchain technology. 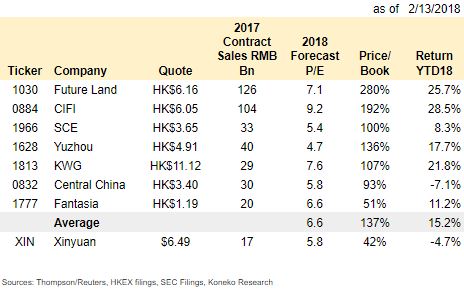 The author was a Xinyuan shareholder and had a short position in Xinyuan call options at the time this article was posted.  The author believes that information in this article may be of interest to other public shareholders.  The author does not make any recommendation regarding any investment in Xinyuan and investors are encouraged to check all of the key facts cited here from SEC and HKEX filings prior to making their own investment decisions.

Xinyuan records a “contract sale” when it has a high degree of certainty over collection of proceeds.  The 20-F includes this description of the sale process:

The company recognizes a “contract sale” when it has received cash deposits and mortgage proceeds greater than 30% of the contract value.

Xinyuan recognizes financial statement revenue using percentage of completion accounting.  Even if the company has received 100% of the cash proceeds at the time of a “contract sale”, the related revenue is only recognized in line with the company’s progress towards completion of its obligations under the sale contract.  For example, when half of the budgeted construction cost has been spent, half of the “contract sale” revenue should have been recognized.  Analysis of Xinyuan’s quarterly income statement revenue is tricky because it combines partial recognition of revenue on newly signed contracts + revenue related to construction progress on contracts signed in prior periods. As a result “contract sales” are the most useful metric for assessing the health of Xinyuan’s projects on a quarterly basis.

One thought on “Xinyuan Real Estate: Notes on 4Q Results”