Sohu is one of China’s oldest internet companies and has been listed in the US since 7/12/00.  It has a significant presence in key industry segments (search, media, and games), but is not the leader in any of them.  Investors have valued Sohu based on the sum of the estimated values of its operating units and these two transactions (Sogou IPO and Changyou privatization) are providing greatly improved clarity that is not currently reflected in Sohu’s share price.  Sohu’s remaining businesses have been losing a significant amount of money, face intense competition, and their fair value may be negative.  If management can execute operational improvements or beneficial strategic transactions then it would be greatly beneficial.

The Sohu valuation thesis described here is not really original, but Sohu’s share price appeared to reflect excessive enthusiasm about the Sogou IPO which has recently led to excessive letdown. 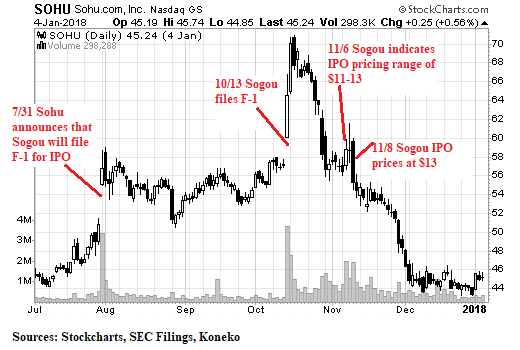 Looking at recent developments in each segment in more detail…

Sogou’s business is documented in great detail in the F-1 filing for the its recently completed IPO. 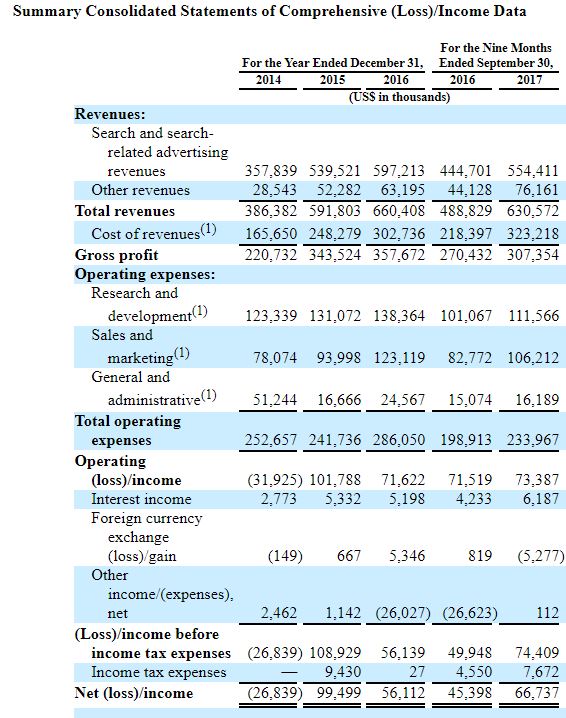 Enhanced Tencent partnership and strong product create potential for expansion in market share in a sector with attractive profitability due to limited competition. Sogou is trading at 30X the average analyst 2018 forecast of $0.40 EPADS.

Changyou’s business, the privatization offer, and fair value are described in more detail in my companion article. Sohu owns 68% of Changyou shares so any significant Changyou corporate actions must serve the interests of Sohu which may be different from those of Changyou’s minority shareholders. In particular:

Steps that Changyou could take to deliver greater value to shareholders may create tax liability for Sohu. Undoubtedly the Board of Directors and its financial advisors will consider ways to minimize this cost, but Changyou’s value has been discounted by 20% in the above table to reflect the possible impact.

Sohu’s traditional internet business provides appealing information and services, but does not have any distinct advantages against intense competition.

Portal – the traditional role of the internet portal has been eclipsed in China by Wechat which now functions for many users as a primary gateway for communications, social networking, and entertainment.

News from third party sources is available through many different sites.  Recently Toutiao ( 今日头条) has enjoyed tremendous growth by offering personalized news using artificial intelligence and is reportedly seeking new financing at a $30Bn valuation.  Sohu is updating its own news service to provide enhanced personalization.  Tencent, Sina, Netease, and Phoenix/Yidian are also significant competitors.  Yidian recently raised money at a $1Bn valuation (as disclosed by Phoenix New Media).  Toutiao and Phoenix have just been hit by a regulatory crackdown on distribution of vulgar content.  It’s possible that an evolving environment will provide opportunities for Sohu to gain market share and clarify the value of this business.

Video services, including paid subscriptions, have been growing rapidly in China.  However intense competition among different providers has led to high fees for content licensed from third parties and heavy investment in original productions.  Sohu disclosed an operating loss of $233mm in 9M17 from video.  The company is not a market leader, but even the top company is losing a lot of money (Baidu 20-F disclosed a $398mm operating loss for iQiyi in 2016).

A year ago the company mentioned a goal of reaching breakeven profitability from video in 2019 and did not disclose any update since then. Sohu says that it is changing its business model and will cut losses by concentrating on its own video production and not renewing expensive licensing agreements.  The strategy was explained by Chairman Zhang during the 2Q17 conference call: 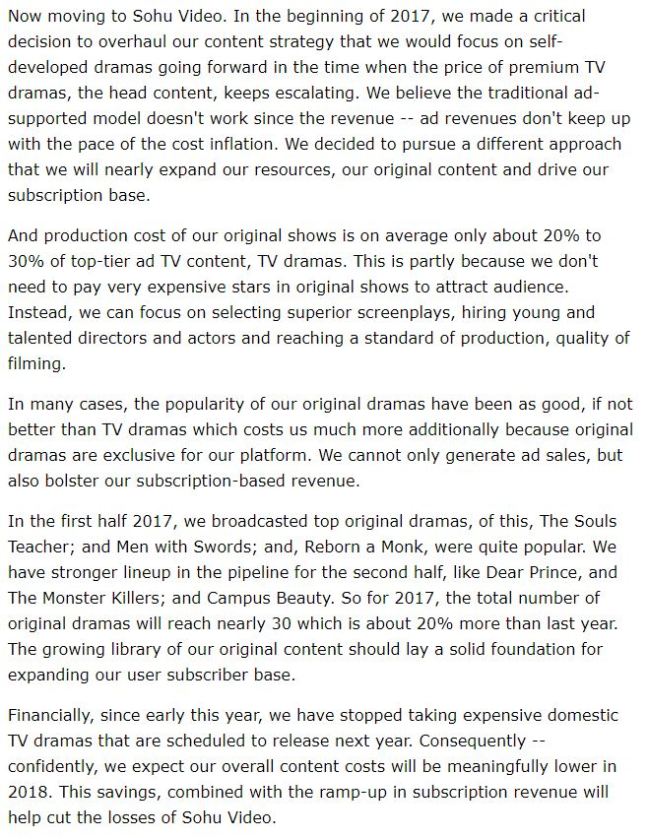 If Sohu is able to reduce quarterly losses from video then it would be hugely beneficial, but it’s unclear whether the new strategy will leave a viable stand-alone business or if Sohu would be better off in a partnership with one of its current competitors.

Sohu has covered the Sohu Media operating losses over the past year with loans from Changyou (secured by a pledge of Changyou shares).

Sohu’s video strategy will place greater emphasis on proprietary content. This can be complimentary to Changyou’s efforts to develop and maintain engaging game content. It Changyou were privatized then it might be beneficial for both parties to maintain some formal partnership.

Changyou’s successful TLBB franchise and high free cash flow have value that is not currently recognized in Changyou’s share price or the initial privatization offer. The higher market valuation of China-listed peers provides a strong incentive for  privatization, but Sohu must consider alternatives such as regular dividend payments from Changyou or joining the Buyer Group as one of the privatization backers. Fair value for a buyout probably cannot be determined until Changyou’s 1Q18 results demonstrate the success of current game launches.

The Media businesses provide valuable services to users, but intense competition makes these segments challenging for all participants. Investors will need to carefully monitor progress on the company’s current initiatives and potential strategic actions in video and news.

Chairman Zhang’s $42.10 privatization offer undervalues Changyou, but it appears that he believed the transaction would still be beneficial to Sohu because he purchased 25000 shares in May 10 days prior to submitting his offer. Sohu’s CEO Wang Xiaochuan then purchased 15000 shares in June.