These comments update my preview from last week.  Overall the results announcement had no significant surprises, a good China sales result, and several minor negatives.

Xinyuan’s 3Q17 contract sales rose 14% from one year ago and met the guidance of 4Bn RMB provided during the 2Q17 conference call.

Xinyuan records a “contract sale” when it has a high degree of certainty over collection of proceeds.  The 20-F includes this description of the sale process:

The company recognizes a “contract sale” when it has received cash deposits and mortgage proceeds greater than 30% of the contract value.

Xinyuan recognizes financial statement revenue using percentage of completion accounting.  Even if the company has received 100% of the cash proceeds at the time of a “contract sale”, the related revenue is only recognized in line with the company’s progress towards completion of its obligations under the sale contract.  For example, when half of the budgeted construction cost has been spent, half of the “contract sale” revenue should have been recognized.  Analysis of Xinyuan’s quarterly income statement revenue is tricky because it combines partial recognition of revenue on newly signed contracts + revenue related to construction progress on contracts signed in prior periods. As a result “contract sales” are the most useful metric for assessing the health of Xinyuan’s projects on a quarterly basis.

Key conclusions from examination of 3Q17 contract sales by project: 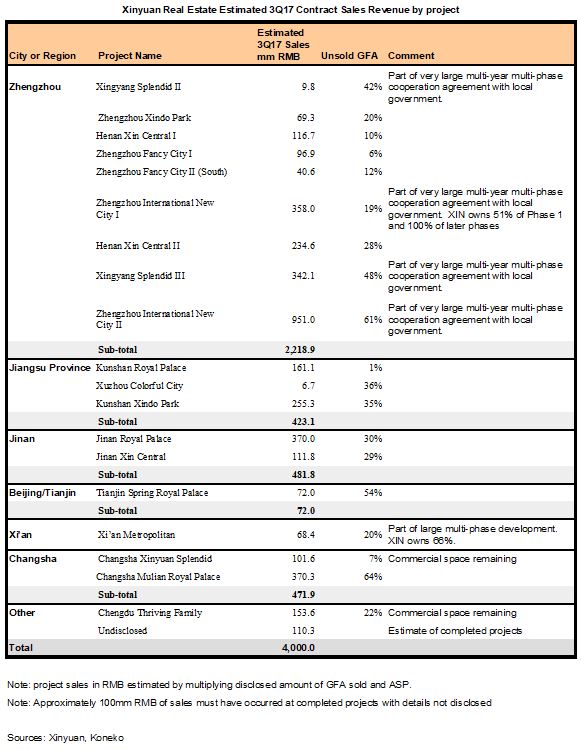 Revenues reported in 3Q17 reflect construction progress towards delivery of sales in prior periods and current period sales at nearly finished projects generate higher current revenues than sales at earlier stages of development.  For example, I estimate that Zhengzhou International New City Phase 2 generated 24% of 3Q contract sales, but only 12% of revenues in the quarter.

Xinyuan’s profit margins should improve as older projects with lower gross margins are sold out.  3Q17 gross margin was 22.6%.  I estimate that about 1/4 of 3Q17 revenues were attributable to projects with weak profitability that are near completion (Jinan, Chengdu, and Kunshan Royal Palace).

Xinyuan recorded disappointing contract sales of only $7.0mm in the US in 3Q17.  Unsold Oosten inventory was carried at a value of $149mm at 6/30.  It would be very beneficial if the remaining units could be sold so that capital could be recycled into the Manhattan and Queens projects now under development.

Xinyuan’s press release noted that “The remaining larger [Oosten] units may take more time than smaller units that have been sold and delivered”.  The 49 unsold units have a carrying cost of approximately $2.9mm each.  The company did very well to acquire the land for this property in 2012 in a neighborhood that has since seen large appreciation of real estate values.  However the company appears to have misread the potential demand  for the highest priced units in that area.  It’s possible that completion of nearby luxury projects under development (420 Kent and Domino Sugar) will further improve the neighborhood environment and facilitate sale of the Oosten units.

Xinyuan’s efficiency has improved in recent years and is at an average level among peers. 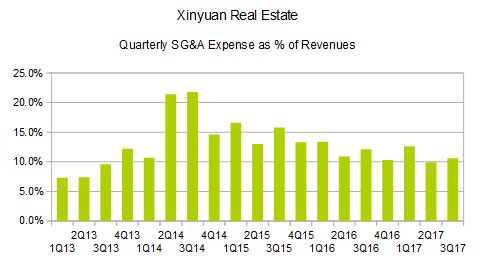 The company blamed high 2Q expense of $20.2mm on “some debt not yet allocated to real estate projects”.  It appears that issue was resolved.  The company does not disclose the amount of capitalized interest in 3/31 and 9/30 reporting so we cannot tell whether there was an improvement in overall interest cost, or merely a change in accounting treatment.

The company incurred a one time charge of $15.9mm related to the early redemption of its 13% notes.  Excluding this cost the effective tax rate was 41% in 3Q17 and 51% YTD.

The company does not disclose shares outstanding at 3/31/ and 9/30 so per ADS amounts must be estimated.

Calculations assume basic shares outstanding were unchanged from 6/30 (65.0mm).  It appears that buyback of 421000 shares in 3Q was substantially offset by issuance of new shares through equity compensation.  Value of Treasury shares rose by $2,202,000 due to the buyback, but paid-in capital rose by $3,424,000 due to issuance.  These figures suggest that shares outstanding may have increased during the quarter, but the press release says weighted average basic ADS were 64.2mm.

The company did not explain why the use of the buyback authorization fell sharply in 3Q17.  Approximately $10mm of repurchase capacity remains available this year under the limitation in the bond indenture.

The company has broadened the scope of its business as implied by banners on its Wechat channel and Chinese website:

Communication with shareholders about the expanded corporate strategy has been limited 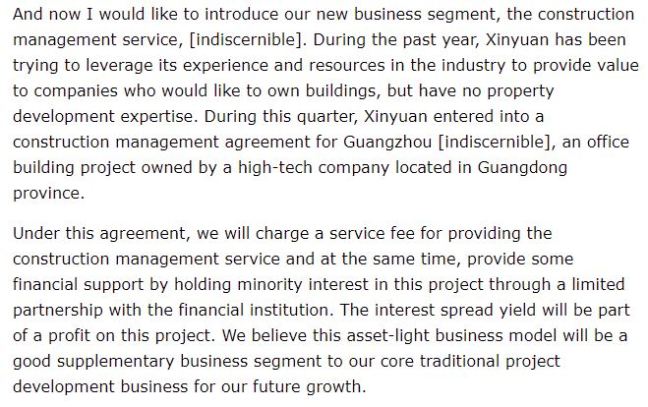 Malaysia appeared to be an attractive destination for chinese investment when Xinyuan acquired the rights to a landfill site near Malacca in 2015 for $10mm.  Country Garden was making a lot of news and enjoying favorable early results from its large projects in the country.  Recent news has been less favorable with excess inventory in Malaysia and capital controls hindering transfer of buyer funds from China.   Xinyuan’s experience in New York showed that starting operations in a new country can be more difficult than expected.   The 20-F cautions:

Last week Xinyuan filed a registration statement for 50mm ADS.  Registration gives the company the opportunity, but not any obligation, to issue new shares at any time.  The company has not disclosed any plans to issue any new shares.

Xinyuan may perceive several benefits from a larger capital base:

It would be extremely negative for shareholders if Xinyuan were to issue ADS around the current price.  The author is not aware of any company plan to make such an issuance.

Balancing the benefits of deleveraging and long-term growth potential against the share valuation, I believe a 35% discount to book value (a price of $9.50/ADS) would be a reasonable level for Xinyuan to raise new equity.

The author is a Xinyuan shareholder.  The author believes that information in this article may be of interest to other public shareholders.  The author does not make any recommendation regarding any investment in Xinyuan and investors are encouraged to check all of the key facts cited here from SEC and HKEX filings prior to making their own investment decisions.

One thought on “Xinyuan Real Estate: Notes on 3Q Results”