Intense market restrictions have kept prices flat in 2017 and the 12 month price change has steadily fallen: 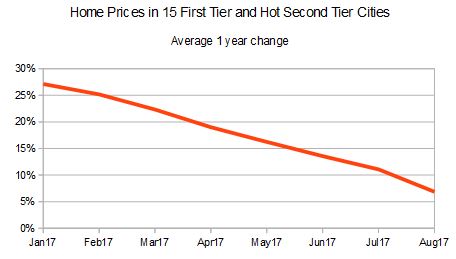 With the reported annual change in the 15 focus markets now under 10% the environment may begin to normalize.  Rising purchases of land by developers (LINK) may raise the supply of homes for sale late in the year and help to balance the market in many cities.

Government policy is intended to curb speculation, financial sector risks,  and misallocation of national resources.  Local governments are expected to implement whatever policy restrictions are necessary to achieve zero price increase.  But these policies cannot be maintained in the long run because fundamental demand remains very strong.  Nominal GDP and money supply are both rising at annual rates over 10% and per capita disposable income is up over 8%.

Alarmist media reports on the deceleration of monthly real estate sales and price appreciation (e.g. WSJ: A Pillar of Chinese Growth Starts to Show Cracks) fail to recognize that the slowdown reflects successful implementation of heavyhanded policies rather than a true deterioration of Chinese economic fundamentals.  If the policies curb unhealthy leverage and speculation then long-term growth potential will be enhanced.