In conjunction with sale of its steel business to its Chairman for $0, Ossen proposes to acquire America-Asia Diabetes research Foundation (AADRF or San Meditech).  A March 2017 private placement by AADRF provides a realistic benchmark for the fair value of the business (source Ossen proxy page 202).

Proceeds of $6,000,000 were received from sale of 4425 new shares.  These shares were 14.8% of the total AADRF shares that would be outstanding prior to closing of the proposed Ossen acquisition.  This implies a valuation of $40.6mm for 100% of AADRF’s business

If the acquisition is approved as currently proposed then Ossen will have 89.2mm shares outstanding, implying a fair value per current ADS of $1.37. 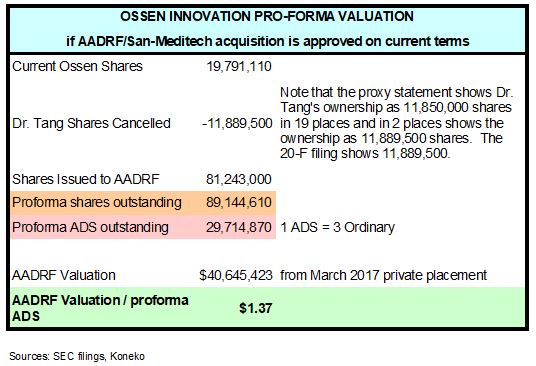 The Ossen Board of Directors paid an obscure entity called “Highline Research Advisors” to provide a “fairness opinion” which showed the value of Ossen’s steel business is approximately $8.15/ADS:

Ossen and Highline provided no explanation for their conclusion that it would be fair for Ossen’s shareholders to exchange a steel business worth $8.15/ADS for a medical device business valued in March at $1.37/ADS.  It appears that Ossen’s Directors (Junhong Li, Xiaobing Liu, Yingli Pan, and Zhongcai Wu) failed to properly perform their fiduciary duties.

Considering San Meditech’s urgent need for new financing (a “going concern” warning in 3/31/17 financial statements and a large debt balance due in August 2017), it appears that the company will need to issue new shares as soon as possible after completion of the Ossen acquisition.  Such issuance would likely result in significant downward pressure on the market price of Ossen ADS, perhaps below the $1.37 valuation where the company raised money in March.

Ossen is proceeding with collection of votes for the shareholder meeting scheduled for September 5 despite the factual errors in its proxy statement.  I believe approval is unlikely for these reasons:

Can this Deal be Saved?

It’s not surprising that Dr. Tang would like to acquire Ossen’s valuable steel business for $0, but it appears that a poorly selected acquisition target and apparent failure to engage competent professional advisors in execution of the transaction leave Ossen’s public shareholders with no reason to approve this transaction.  It appears shameful for Dr. Tang to seek to retain all funds invested by shareholders in his business while leaving them with only a tiny retained interest in a new business at high risk of bankruptcy.

It’s not surprising that San Meditech would like to go public, but delays in growth of the business and apparent failure to engage competent professional advisors make this a poor time to become public.  If San Meditech’s products have real potential then I believe it would be wiser to seek investment from a US venture capital firm that would provide sufficient capital to cover the current liquidity shortfall and guidance towards achieving a successful future listing through a traditional IPO at a much higher valuation.  San Meditech would suffer higher dilution in the short-term, but less in the long-term.

Nevertheless, if these parties remain committed to this transaction structure then I suggest the following terms would be fair to all parties:

Conditional terms used in the article such as “may” “could” “seem” and “appear” indicate the author’s subjective opinion based on the facts presented.  Readers are encouraged to check the facts themselves rather than relying on the author’s opinion.

The author has made his best effort to accurately summarize facts publicly available as of the date of publication (08/17/17).  The author does not want to spread errors or misinformation.  A link to this article has been sent to Ossen Innovation, Dr. Tang, and Mr. Hao of San Meditech.  If these parties, or anybody else, can provide public information as of 08/17/17 which shows there are errors in the text then corrections will be made as promptly as possible.

Aside from corrections to any errors discovered in this article, the author may not release new public commentary about Ossen.  His willingness to do so will depend on future developments which cannot currently be predicted.

Interested parties who wish to communicate privately about Ossen Innovation may contact the author at konekoresearch (at) gmail.com