China Automotive Systems (CAAS) has a long public company history following its US listing in 2003.  It was formed through merger of suppliers to domestic Chinese automakers and has maintained good corporate relationships with these key customers.  A 2014 Geoinvesting article  provides a nice introduction to the group.

Steering systems have undergone several major transitions from manual to hydraulic power (HPS) to electric power (EPS) and will play a key role in future Advanced Driver Assistance Systems (ADAS).   Each new generation improves safety and fuel efficiency, but at higher upfront cost per unit.  Each new generation of more sophisticated components increases the competitive importance of technology.  ADAS will bring higher margin and profit potential, but will require large R&D expenditure and could be disruptive to existing suppliers.

As a small player in global markets CAAS has a significant opportunity to gain market share, but faces a significant challenge in keeping up with product development ability of larger competitors.  Chairman Chen’s offer (LINK) does not fairly compensate public shareholders for the company consistent profitability and future potential.  A 10 P/E would still value the company below all listed competitors, but reflect the uncertainty over industry developments.

The global steering market has a limited number of major participants:

In addition to CAAS, there are several smaller domestic Chinese suppliers including Zhejiang Shibao and Xinhang Yubei.

Comparison of CAAS and Nexteer

Nexteer’s rapid growth since it came under Chinese control makes it the most useful benchmark for CAAS performance and valuation. 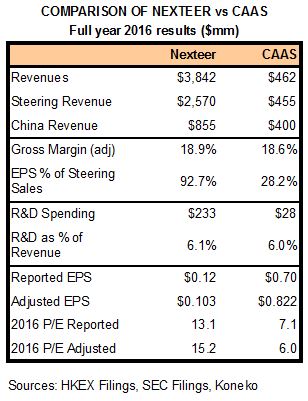 Two adjustments have been made to present 2016 results on a comparable basis.

Nexteer’s rapid growth has eroded the advantage CAAS once held as the leading domestic producer of steering systems.  Nexteer has a higher annual R&D budget and more advanced product line (almost all sales from EPS).  CAAS margins show that it continues to operate successfully at the lower end of the market. 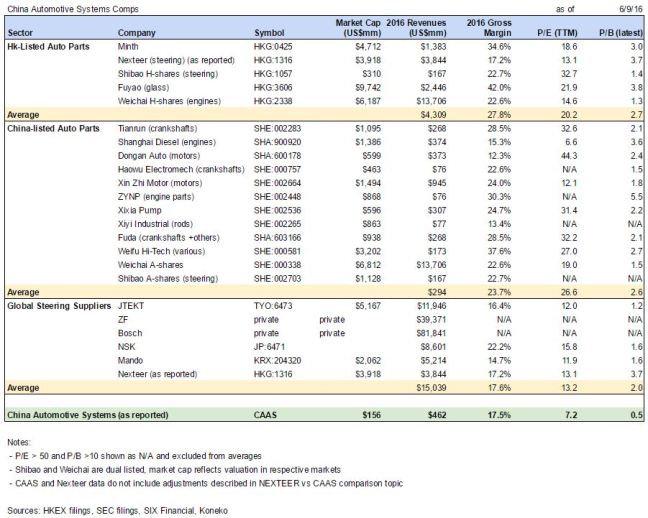 CAAS valuation is much lower than other HK and China listed auto suppliers.  But leading global competitors like JTEKT and Mando are also cheaper than China listed companies.  It would be hard to argue that CAAS deserves a higher valuation than a Japanese or Korean company which has bigger scale and a more advanced product line.

CAAS investors have to balance the opportunity for growth in unit prices and market share against the risks of competing with larger players.  In my opinion a 10 P/E would provide fair compensation in a buyout of CAAS public shareholders.

CAAS has provided guidance for 2017 sales of $485mm.  The company has not given an outlook for margins, but they have been fairly steady over time. 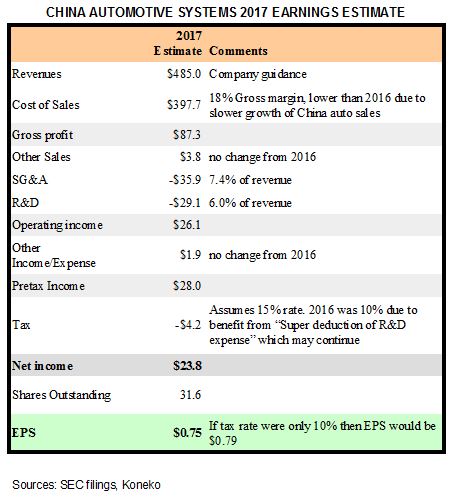 Chairman Chen’s letter stated: “I am interested only in pursuing this Acquisition and am not interested in selling my shares of Common Stock of the Company in connection with any other transaction.”  A competing offer is therefore unlikely.  The following alternatives are available to shareholders and the company:

Chairman Chen’s letter did not mention the support of any financial partners for his buyout offer.  This might increase the risk that it lapses due to the absence of a private equity firm with experience in all the legal, regulatory, and financial steps required for completing a deal.  On the other hand, CAAS has positive working capital ($168mm at 3/31), substantial annual earnings (over $20mm/year) and no long-term corporate debt.  I believe a buyout could be completed with bank financing and no significant equity partner would be required. 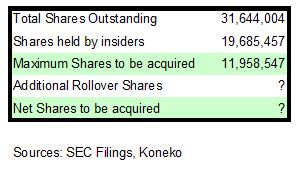 I assume that all shares held by insiders would be rolled over in the buyout rather than acquired for cash.  It is likely that a substantial number of additional shares are held by parties with personal or business connections to Chairman Chen and CAAS and these shares may also be rolled over.  For example, in 2014 CAAS issued 4,078,000 shares to nominee holders specified by Jiulong Machinery Electricity in compensation for acquisitions of the minority interests in two joint ventures (LINK).  If those shares were not sold then the owners may wish to maintain their interest after the buyout.  At a buyout price of $7.50/share, $90mm would be required to buy all non-insider shares, but additional rollover participation could reduce the financing requirement.

Chairman Chen may not be willing to offer a fair price to public shareholders.

The China passenger vehicle market may weaken.  Car sales rose 14.9% in 2016 helped by a temporary reduction in the sales tax rate on small vehicles (see 01/13/17 article).  In the first 4 months of 2017 car sales are up only 1.5% compared to last year (LINK).  Lower sales could reduce Chairman Chen’s willingness to complete a buyout.  Or Chairman Chen could attempt to take advantage of a temporary cyclical slowdown in sales by acquiring the company at a lower price.

CAAS may lose market share if its EPS and future ADAS products do not offer competitive pricing and performance.

Disclosure: The author is a public shareholder of CAAS seeking the maximum possible return from his investment.  Interested parties who wish to communicate privately about CAAS may contact the author at konekoresearch (at) gmail.com

One thought on “China Automotive Systems Buyout Price Should be Raised to at least $7.50”