Vehicle sales in China were 10.9% higher in November than one year ago.

November Passenger vehicle sales were 10.5% higher than one year ago  with continued support from the purchase tax reduction that began last October and will continue until the end of this year.  There’s some speculation that the tax benefit will be extended to 2017.

Commercial Vehicle sales improved led by Heavy Trucks +97% in November and 30% YTD.  Factors supporting the rebound in truck volumes are:

The rate of growth in New Energy Vehicles slowed due to a government crackdown on fraudulent subsidy claims in this sector (see Bloomberg article).

The US listed auto suppliers have varying exposure to these segments:

Share prices of the US-listed suppliers show rising investor awareness and interest in these companies: 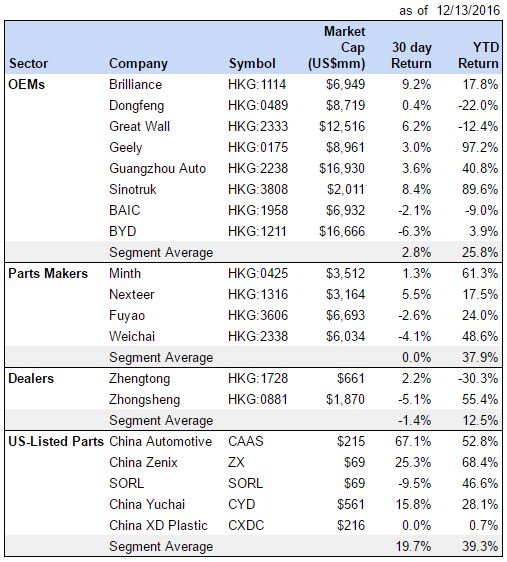 CXDC and CAAS are the main beneficiaries of the continued strength in the passenger market while ZX and CYD should see improved results from the current surge in truck sales. CXDC and ZX are indirect beneficiaries of government incentives for “New Energy” electric vehicles.  Strength in SORL’s brake sales for commercial vehicles is offset by governance problems.