China Index Academy (a research unit of Soufun) released its monthly report of new home prices in 100 top Chinese markets (LINK).  On a national basis average selling prices rose 2.8% for the month and 16.6% from one year ago. 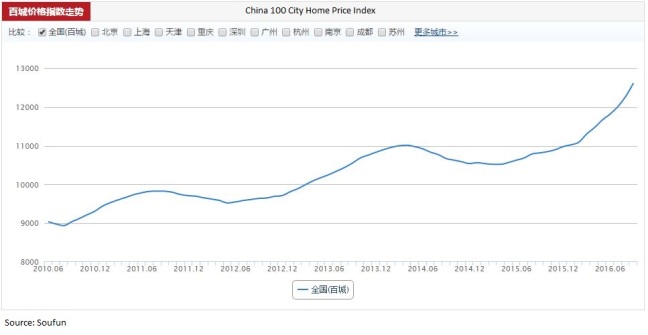 In September more cities including Nanjing, Hangzhou, Zhengzhou, Kunshan, Jinan, Beijing and Tianjin introduced new measures to restrain markets.  But like Black Friday doorbusters, these restrictions sometimes lead to panic buying sentiment as seen at one development in Hangzhou:

For some perspective on the China property market see: Mid-Year Letter from Ronnie Chan of Hang Lung Group.  And for comments on the current strategies of some small and mid-sized developers see: Benchmarking Xinyuan Real Estate after its rally

Data for Yuzhou’s markets are in the table below: 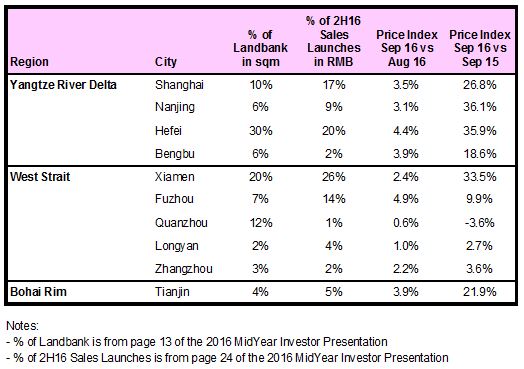 The Yangtze River Delta cities have strong and diverse economies with rising wages and rising populations.  Recent policy tightening in Shanghai Nanjing and Hefei is likely to cool transaction volumes but is unlikely to (and is not intended to) reduce prices.  The experience in Hong Kong from 2005-2015 was that only a major increase in land supply can cause a price correction.  So far Chinese cities have not followed this policy and instead are experimenting with further restrictions on land supply.  Land acquired by Yuzhou in 2015 and early 2016 prior to the new restrictions is likely to provide several years of very profitable sales.

The West Strait region is Fujian Province where Yuzhou was founded and has been the leading developer in Xiamen for many years.  Xiamen has been one of China’s best markets because the city center is an island with abundant parkland.  It’s a nice place to live and space for development is limited so island residences command premium prices.  The regional economy contains many links with Taiwanese businesses,  but the export orientation has cooled cities like Fuzhou Quanzhou and Zhangzhou due to the slowdown in world markets.  With its long history in the region Yuzhou has a large low-cost landbank.  For example, the average cost of 1mm sqm of potential development in Quanzhou is just 374 RMB/sqm so the holding cost of this land during a weak market is minimal and is not any burden on the company balance sheet.