Continued strength in Shenzhen (+4% in Sep) suggests that the Summer crash of the Shenzhen stock market is not having a significant impact on consumer spending.

The weakest markets compared to September 2014 were smaller cities: 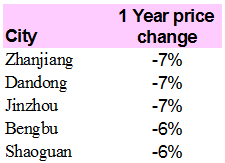